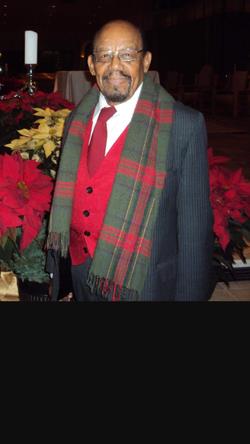 Carlyle Solis Roudette died on June 14, 2018 at the age of 94.  He was born on  November 2,1923 in Port of Spain, Trinidad & Tobago. He worked as a Trinidad civilian with the American Army Corps which was based in Trinidad during WWII.  He was a successful salesman in Trinidad and in relocating to New York, he continued his sales career while hosting a nightly radio show on WHBI.  Following his relocation to Houston he worked for the Harris County Sheriff's department and MHMRA.  He was a founding member of the Knights of Columbus council #11438 of St Leo's Catholic church and served as the Grand Knight for 2 years.He was a 4th Degree Knight of Columbus and a choir member at St. Ignatius Catholic Church.  He was full of life and laughter. He had a contagious smile, a song in his heart and candy in his pocket earned him the name Candyman by both young and old. He never met a stranger and truly loved people. His legacy can be found across the globe and he will be missed by many.  Carl is survived by wife Debbie, sister Sheila and brother in law Irwin Faustin of Canada.  He was the father of Carla, Carlene, Glen, Tanya, Elizabeth and Carlyle T, Grandfather of Lindy, Lishon, Kareem, Dean, Greatgrandfather of Lizzie, Reese and Greyson. Uncle of Anton, Denise, Vonnie, Keith and Chris of London, Kathleen Ann,  Gweneth and Mike of Canada, Great-Uncle of Vincent, Gandalf, Marlon, Joel, Harry, Rimini, Aiko,

Preceded in death by parents Gerald and Claudine, brothers Conrad and Clayton and sons Victor and Clayton.
The family of Carlyle Solis Roudette wishes to express their appreciation to the many people who have offered prayers and support during this difficult time. A special thank you to Klein Funeral Homes and Memorial Parks, Rev. Norbert Maduzia Jr, Deacon Peter Olivier, Deacon Scott Glueck, St Ignatius Catholic Church and Choir, Doctors and staff of Kelsey-Seybold, Memorial Hermann The Woodlands, Brookdale Willowbrook Pl, Silverado Hospice, Nan's House. Memorials may be made to a charity of your choice.

Requiescant Im Pacem, My Friend. I will miss you always.

He lived his life his way. Rest in Peace My Father.

Deepest sympathy to the family. We will miss you. We Love You.

REST IN PEACE AND GOD BLESS YOUR FAMILY, WHAT A GREAT FRIEND

In loving memory of a wonderful person. We will love you and miss you always. With love Debbie, Elizabeth,Carlyle

Never miss an update about Carlyle. Sign up today.