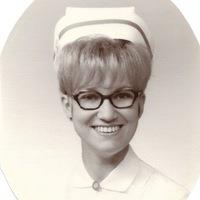 Carolyn was born on December 17, 1941, in Fordsville, Kentucky, daughter of the late Cecil and Marie Finley Wilson.  She graduated from the Appalachian School of Nursing in 1969, as a Licensed Practical Nurse.  After graduating, she worked in labor and delivery at University of Kentucky Hospital until moving with her family to Ohio County, Kentucky.  She worked at the Ohio County Hospital as an OR nurse and as an office nurse for a surgeon.  Being a military wife, Carolyn later held many different nursing positions in different locations across the Eastern United States.

She is survived by her daughter and son-in-law, Martha “Martie” Relinski and Daniel, of Chapin, South Carolina; her sister, Dorothy Beasley; her brother, Robert Wilson; four granddaughters, Bonnie, Madison, Moli Ann and Jessica; two grandsons, Jeremy and James; seven great-grandchildren; and many nieces and nephews.

Preceding Carolyn in death are her parents; her husband, Capt. Martin C. Gross; and her son, Henry C. Gross.

In lieu of flowers please send donations to the Noah’s Ark Animal Rescue as Carolyn was an avid animal lover www.noahs-arks.net

We will miss you. Please say hi to Ssorg for eneek and me. Martha and family you are in our thoughts and prayers.

Martha and family, so sorry to hear about your mom. My prayers are with you all.

I’m sorry to hear about Carolyn. Prayers for you all. Love you.

So much love for such a sweet lady. I love and miss you grandmother!

I love you Grandmother! You will be greatly missed and forever remembered! Thank you for always being there for my family and me.!

Thank you for being a wonderful mother in law for the past 27 years. I love you. You shared with me a beautiful Henry, two absolutely perfect daughters- Madi and Moli, and little Miss Laney with another on the way. You will be cherished forever and you will live on in all of us. All my love, your 'forever daughter in law'