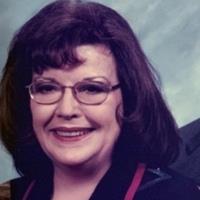 Carolyn was born on February 24, 1944 in Norman, Oklahoma to Noel and Bertha Marvin.  She was a member of University Church of Christ and taught Toddlers Sunday school class. She graduate from Canton High School and married John William "Buddy" Sparkman in 1962.   She worked at Logtech for 16 years and was a homemaker.

In addition to her parents, she was preceded in death by her husband, Buddy Sparkman and son, Bill Sparkman.  She is survived by her son, Stephen Sparkman and wife Tonya of Missouri City; five grandchildren, Sydney, Georgia, Lila, Blake and Alexis Sparkman.

I will always remember Mrs Sparkman, her booming laugh, beautiful smile, and tender generous heart. She loved her family with passion, loved God, and was never afraid to say so. She added life and zest every time she entered a room. Blake and Alexis, you were both her pride and joy and I know she is watching you still

My cousin, Carolyn, was a beautiful lady with a beautiful soul. I will always remember her low, sultry voice uttering her favorite expression, Ohhh, Lord.
I hope to see you soon, sweet Caro!

Sending prayers to the family. God will see you through and bring peace to your hearts.

We always loved Carolyn and her family. We remember many laughs together about funny events of you and my wife, Nancy. May the Lord hold you In his arms until we meet again together. We Love You. Dr. TC & Nancy Erwin

Sweet lady. I remember growing up across the road.

You will truly be missed. I remember the three musketeers (you, Charlene and Mom)). We had some great times. I love you dearly Carolyn.

My cousin Carolyn was larger than life and full of spunkiness! I was 6 yrs old when she and Buddy married and I thought she was the prettiest girl in Texas!! She loved my Dad and Mom Uncle Archie and Aunt Margie with all her heart! Ill miss you but we will see each other again!! Love you always!!!!

Our thoughts and prayers are with yall at this time.