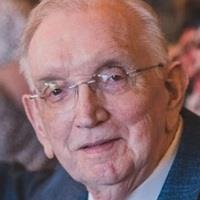 Casimer Joseph Wesolek (Cas) left this life and passed into glory on Monday, November 29th, in Lansing. Born in South Bend, IN in 1935, to the late Eugene and Josephine Wesolek, Cas graduated high school in 1953. He began his career as a draftsman for Studebaker because of his talent in math, especially geometry. Three weeks before his marriage to his beloved bride of 64 years, ODetta (Mears), he read the Gospel of John, realized his need to be saved from his sin and submitted his life to Christ. His life was forever changed. Cas and ‘Detta were married in 1957 and honeymooned on Mackinac Island.  They moved to Lansing as Cas worked in the auto industry for 30+ years. He was a designer who received an honorary $1 for a patent with General Motors. Cas became a member of South Church in Lansing. He loved the Lord, he loved his church, he loved to serve and help others, which he faithfully did for 60 + years.

He retired and began many years serving as a volunteer at McLaren Hospital in the Auxiliary, eventually serving as the Auxiliary President while conducting productive fundraising for the hospital. He enjoyed encouraging numerous missionaries, traveling to over nine countries. Devoted to family and friends, Cas enjoyed friendly teasing with lovable nicknames and always getting together over a meal.
He is preceded in death by his aforementioned mother and father, a brother Eugene Jr. and a sister, Rosemary. He is survived by his beloved wife, Detta, children Timothy and Julie Wesolek of Frederick, MD, Thomas and Juli Wesolek of Monett, MO, and Kathleen and John Risch of Mason, MI.  He has seven grandchildren, and so far, seven great grandchildren.  “You have walked in integrity and your children are blessed.” Psalm 20:7. There are many more lives that his years of faithful service has touched, but Cas now sees his Savior face to face.

Visitation is at Palmer, Bush & Jensen in Delta from 3 to 7 pm on Thursday. The memorial service is at South Church, Lansing. Family will receive friends at 12 noon, followed by a Memorial Service at 1 pm. The service will be livestreamed via southlife.org/funeral. In lieu of flowers, memorial contributions may be made to either South Church, Lansing, or McLaren Hospital Foundation, Lansing MI.

I can only imagine the celebration of saints when Cas was ushered into the presence of the Lord. Thank you for you life service to Christ Cas and Detta

I knew Cas as a volunteer at McLaren. He was both a leader and a hard worker. He exemplified a servant spirit. Despite being busy with his responsibilities, he always had time to chat with other volunteers and with the patients he served. It was a privilege to know him.

Cas will be greatly missed as a volunteer at McLaren. I enjoyed working many of the fund raising sales with him. My deepest sympathies to his family.

My deepest condolences to all of Cas's family members, friends, associates, and neighbors for your loss. We worked together at Oldsmobile Engineering for 34 years, and shared many of the rewards of working in a great organization, and with so many talented friends. One of my greatest respects for Cas came from his talent and contributions to the "Radio Free" efforts in so many countries, and the positive impact that had for so many people.
My memories of him are still warm...

Never miss an update about Casimer. Sign up today.