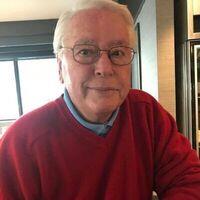 On Thursday, October 8, 2020, Chuck Holcomb, 82, of Denton, Texas, peacefully passed away, with his wife by his side, after a courageous 16-month battle with pancreatic cancer.

Chuck was born in Chickasha, Oklahoma, and having a military father, went to 11 schools in 12 years.  As a result, he was a very social child, never meeting a stranger.  Sales was a natural career path for him which he enjoyed until his retirement. While he loved playing bridge and tennis, the Dallas Cowboys and golf were his true passions. Both were always on display as he played from his Dallas Cowboys-themed golf cart. He always had a positive attitude, a quick smile and will be missed by family and his many friends all over the country.

He is preceded in death by his parents Hoyt and Vera; brothers West and Gary.

A Celebration of Life will be held at a later date. In Lieu of flowers, please consider a donation to The American Cancer Society.

He In loving memory of a wonderful person. We will love you and miss you always.

Sherry our hearts and prayers are with you and family...... Chuck was a wonderful many and friend. We indeed have some great memories of our times together in St. Louis. We have been honored to call you and Chuck good friends for many years.

Sherry, thank you for posting Chuck's obituary in the West Orange Observer. We remember such good times when you lived here in Winter Garden and Clermont. We enjoyed your friendship. Chuck had kept up with us through emails until recently. How wonderful that he was surrounded by so much family in Texas. Our prayers are with you.

From the first day Chuck and Sherry moved next door to us at Robson Ranch, he was our friend. Chuck used to come out in the back yard and when he saw us on the porch he always came over to the fence and greeted us. Chuck did have a great smile and a happy countenance. We want to stay in touch with his lovely wife, Sherry and pray that she continues to feel God's peace.

Chuck has been in my life, all of my life, and I never saw Sherry without Chuck. One of my favorite memories was the meal together in Disney World. I am so thankful to have had him in my family and he will always be missed. Sherry, I am sending you my love. My prayers surround you & all of Chuck's other family and friends.

Sherry our hearts and prayers are with you at this time, what GREAT neighbors. I sure miss him sitting on the back porch with his smile and always being so up beat and so nice to talk to.

My best friend who loved golf and the Masters.

Sherry we just heard of Chucks passing. Know that our prayers are with you and family. Loved his smile and the fact he never aged. Such a gentle man.

We have been friends for a long time and when you decided to move to Texas it broke our hearts. You were so special to us and we miss you so much. But, truly, I am thankful that your life ended in Dallas where all your family is. That was a blessing. You did not leave this world alone. You have a lovely wife and kids and that is so special. They will carry on your legacy. We love you my friend!. Love, Ron and Elaine.