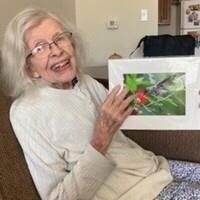 Charlotte West passed away peacefully in her sleep on November 17, 2021 at St. Therese-Oxbow Lake in Brooklyn Park, MN.  She was 94.

Charlotte was born in 1927 in Hancock, MI.  After graduating from Hancock High School, she enrolled in business courses at Suomi College (now Finlandia University), receiving her Associate's Degree in Bookkeeping.  She started working at Michigan Bell Telephone in Calumet, MI traveling around the state conducting training for the company.  She would travel many times throughout her long life.

Char had the good fortune to take a trip on the Queen Mary ocean liner with her friend Corky Plassa to England.  It was on the return trip home she met Edith West, her future mother-in-law, who mentioned that her son David also lived in the Upper Peninsula of Michigan. A few months later, Dave made his first trip to Hancock to meet her.

Charlotte and David married in 1959, and moved from Negaunee, MI to Munising, MI in 1967 where she became very active in local politics, St. John's Episcopal Church, the Girl Scouts, and volunteer work while raising their daughter, Mary.  She was twice elected to the Munising City Commission, and for a brief time served as Mayor pro tempore.  In 1978 they moved to Gladstone, MI where she worked for the U.S. Forest Service in Escanaba.  They eventually settled in Elkhart, IN, where she found her dream job as Executive Secretary to the Academic Vice President of St. Mary's College in Notre Dame, IN.  Following retirement from St. Mary's they moved to Englewood, FL where she and Dave spent winters, returning to Hancock, MI in the summer for many years.  In 2014, Char moved one last time to the Minneapolis, MN area to be close to her daughter Mary.

Char always had a word of encouragement for you, a great sense of humor, and a smile for everyone.  Her passions in life were her family, travel, reading, the Green Bay Packers, politics, and her two dream trips; to Egypt in 2000 with Dave, and to Greece in 2008 with Mary.

In accordance with Charlotte's wishes, her ashes will be interred in Hancock, MI at a later date.

My heart goes out to the family. My condolences. She was a beautiful woman and had such a wonderful full life.

Aunt Char was so sweet and so fun. I loved long talks after dinner and hearing family stories about growing up in Hancock. While my dad joked with us about having to walk to school, in the snow, uphill, both waysChar would chime in with “and he walked me to and from my school each way too”. To which we would say - don’t encourage him and we would all chuckle! So special were the tales she tag-teamed with Uncle Dave (the second turkey and her dorsal fin!). She loved her family and friends BIG...

It is hard to put into words the 70 years of knowing Char. I went to work at Michigan Bell in Hughton & she was already there supervising the Business Office. It wasn't long before I was fortunate enough to spend weekends at a former Coast Guard Lighthouse on Lake Superior that she leased. What joy that was. It also was the place where the planning of a 30 day, 8 country tour took place & what a world wind that was. Being the youngest of the group - we sure got our money's worth....

My sincere condolences to the family. May Charlotte, (Mary's mum) rest in peace.

I had the honor to work with Char at Saint Mar’s College. She was a kind person and could talk on many subjects, so well rounded. She gave me good advice as a wife and mother. Such a great example to us all. Gif bless her soul.

Happy memories flood back... Band competitions shared up behind her home. Picking blueberries (and eating them) on Grand Island. Great camp fires. Encouraging words when visiting college campuses. Her expression of joy while cutting my wedding cake. Aunt Char was the best at making you feel special.

My deepest condolences to the family. May she Rest In Peace

Char was an ideal Aunt. She was so lively and full of youthful spirit. She sailed to England on an ocean liner and brought us kids letter openers as a souvenir. They were long and in the upper half was a clear compartment which contained a model of the Queen Mary. She was adventurous and one summer lived in a former lighthouse. Over the years we had many experiences of her wonderful skills as a hostess and cook. She was a lovable Luddite, however, and her personal computers schemed against...

Char was the best friend you could ever have. We had such a wonderful bond, kindred spirits. I miss her dearly. She will always be in my heart.

Never miss an update about Charlotte. Sign up today.