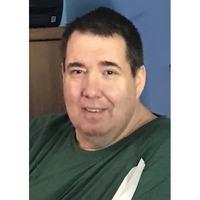 Chet Davies, 50, of Henderson, Kentucky, passed away Saturday, August 7, 2021, surrounded by his wife and family.

Chet was born in Rapid City, South Dakota, on December 14, 1970.  He moved to Louisville, Kentucky, to be with his wife, Billie Jo.  He loved Jesus, the Chicago Bears, being on the computer, cats, and his family.

He was preceded in death by his parents, Irvine and Janice Davies.

Billie & family, love and prayers.
Dear God,
Grant to Chet eternal rest. Let light perpetual shine upon him. May his soul and the souls of all the departed, through the mercy of God, rest in peace. Amen.

We are truly sorry for your loss. We love you

Billie Jo, I am so sorry to hear this. You & the family will be in my thoughts and daily prayers.

So sorry for your loss Billie Jo. I know we haven't seen each for along time but I remember the good times at Davita! Prayers.

Uncle Chet, Eric and I are going to miss you! Sending our love to his wife and children.

Iam so sad to hear of Chester's passing I have known him since he was about 4 years old he was such a good person, my sympathys to his wife and children his siblings,His sister Cindy always looked out for him when he was growing up

Never miss an update about CHET. Sign up today.