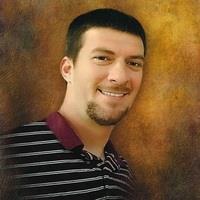 Graveside services will be held at 1:00 PM Saturday, November 21, 2020 at Oakdale Cemetery and will be conducted by Pastor David Linton.

Chris was born June 4, 1985 in Mecklenburg County to Robert Paul Baldwin and Cathy Sue Pipkin Baldwin who survive him. He was a 2004 graduate of Southside High School and was employed as a Fusion Tech with Wolseley Industrial in Washington.

Survivors include his daughter, Emily Ruth Baldwin and her mother Dana Taylor of Beaufort; his parents, Robert Paul Baldwin of Mount Airy; his mother, Cathy Pipkin Baldwin of Washington and his brother, Jason Baldwin and Crystal of Oak Island.

In lieu of flowers, memorials may be made to the Christopher Baldwin Memorial Fund, P.O. Box 1465, Washington, NC 27889.

You may address condolences to the family by visiting www.paulfuneralhome.com.

Paul Funeral Home & Crematory of Washington is honored to serve the Baldwin family.

I hope you are in a better place

So sorry. Chris was always a very nice and caring young man. May God bless you and your family in this time of sorrow.

May friends and family strengthen you as you suffer the pain of this loss. Chris will be missed by those who knew and loved him. With deepest sympathy.

We are so devastated at work for the loss of Chris. We will surely miss seeing his face everyday. Prayers for the family.

My heart is broken . So many sweet memories I have watching you grow up. Our world has changed forever. I know you're safe with Granny and Pa now.

Prayers for Chris’ family and friends