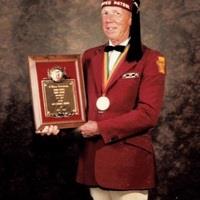 He was born July 28th, 1928 in Mechanicsburg, Cumberland County, Pennsylvania, the son of the late Clarence & Violet Murphy Fertenbaugh.

After graduating from Mechanicsburg High School, Mel served in the US Army during the Korean War.  Mel retired as Manager from the former Myers Oldsmobile, Lemoyne.  He was a member of Mt. Pleasant Church of God, Dillsburg.  A member of the Harrisburg Consistory, Eureka-West Shore Lodge #302 / West Shore Lodge #681 and a Life Member of the Zembo Temple Shrine and Zembo Mounted Patrol, where he was chosen as the International Horse Patrol Shriner of the Year (1987-1988) and Mid-Atlantic Horse Patrol Shriner of the year for 2008.  Mel served as Jewelry Chairman of International Shrine Jewelry from 1999-2007.  He and his Mounted Patrol Unit rode in the California Rose Bowl Parade in 1978, 1985 and 1991.  Mel was also a member of the Cumberland County Shrine Club, Valley of Harrisburg AASR, the Carriage Association of America, The Bonny Brook Riding Club, the Red Rose Horse and Pony Club and the Williams Grove Historical Steam Engine Association, Inc.

Mel is survived by his loving wife of 69 years, Mary Louise Hartman Fertenbaugh along with several nieces and nephews.  In addition to his parents, Mel was predeceased by his brother and sister:  Romayne Fertenbaugh and Creedon Fertenbaugh.

Service will be held Saturday, November 28th, 2020 at 10:00 am in the Cocklin Funeral Home, Inc., 30 N. Chestnut Street, Dillsburg, PA with the Reverends Thomas Myers and Patrick J. Rooney, officiating.  Burial with Military Honors will be held, Tuesday, December 1, 2020 at 11:30 am, in the Ft. Indiantown Gap National Cemetery, Annville, PA with the Reverends Robert Bistline and Zach Wilt, officiating.

I'm saddened to hear of Uncle Mel's passing. I sure wish I had known. Sending sympathy, Love, and Good Thoughts!

Thinking about you Mary - know from experience, this is not easy. Sending love and prayers, Phil

Such fond memories during my high school days of learning how to ride, buying and boarding a horse with Mary and Mel - and not such fond memories of helping to make hay! Mel's sense of humor always accompanied by that twinkle in the eye will never be lost on me. Sending lots of love to Mary. Scott

So sorry for your loss Mary. He will be missed.
Jim and Pam

Mel and his lovely wife Mary are simply the best. Heaven has a bright light!

Mel was a great " horse Riding Friend" we have known them for many years.
He will be greatly missed. OUR PRAYERS ARE FOR "MARY". LOVE AND
BEST WISHES TO HER.
LOVE -JOHN AND EDITH RYAN - HORSE FRIENDS...

Never miss an update about Clarence Melvin. Sign up today.