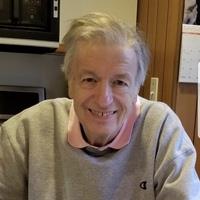 Not the right person? See All ›
DIED
May 8, 2020
LOCATION
Scotch Plains, New Jersey

It is with deep sadness that the family of Colin A. Couchman of New Providence, NJ announce his passing on May 8, 2020.

Colin is survived by his wife of 56 years, Shirley, his daughters Claire and Nicola and their spouses Rory and AJ, and his grandchildren Ryan, James, Kate, and Andrew.

Colin was born in Croydon, England in 1940.  He attended the Whitgift School in South Croydon.  Colin retired as a Vice President of Systems Operations after a long career in the banking industry.  He spent many years working for Chemical Bank in London and Bankers Trust (Deutsche Bank) in New York City.

Colin coached several soccer teams in New Providence for his daughters as they were growing up.  He remained a fan of English football - Crystal Palace in particular - for all of his life.  Colin and his wife enjoyed cruising in their retirement and traveled extensively in Central and South America, as well as the Caribbean and Europe.  They also enjoyed attending NJ Symphony concerts at NJPAC.  He was also a willing babysitter and always up for a card or board game.  He was an avid bridge player and became a Gold Life Master in 2017.  He played bridge at the Essex Bridge Center in Livingston, NJ.

Colin will always be remembered by anyone that knew him as someone who had strong opinions and strong ideals.  He will be greatly missed.

In lieu of flowers, the family request donations to the Summit Symphony Orchestra at 100 Morris Ave., Summit NJ 07901 or directly through their web site - http://summitsymphony.org/support-us/donate-today

Plans for a memorial service will be made in the future.

I have only just today learned of the passing of my friend. I knew Colin only at Essex Bridge Center, and partnered with him several times. He was a creative bidder, which made our games fun and thought-provoking, but much more than that, Colin had a range of interests to provoke thought.
Im glad to have known him.

So many fun Holidays spent with Colin and his family. I will always remember you with a great big smile, and a fierce competitor at the trumpet board game!! Thank you for all the jolly good times and laughs we've had. I will miss you my friend. As Claire said to me, "Boxing day just won't be the same", without you there.
Rest in Peace Mr. C

I met Colin at the Essex Bridge Center and had the pleasure of being his partner. Not only was he a skilled player but he also was an avid television and movie reviewer. He would always recommend movies and series I should watch on BBC. I have been thinking about Colin a lot this past month. Rest In Peace

Thank you all for your kind words about our Dad. We are grateful for all of the years we had him for and all of the many things that he taught us. We will miss him very much.

Shirley, Claire, and Nicola (and their families), We were saddened to hear on Saturday of Colin's death. We have fond memories of times we spent together: the Christmas Eve get-togethers, sharing car pooling to rehearsals, stories of adventures of our dogs (Ming's encounter with the skunk, Bravo and Dash knocking our Christmas tree sideways when we were at your house one Christmas Eve.), and Colin's constant puzzlement as to why the two of us, math majors both, had no interest in playing...

Claire, Rory and family,
My sincere condolences on your familys loss of your beloved Colon, (Father, husband, grandfather). May he rest in eternal peace. Love to all, Aunt Judy

I was sorry to hear about--I think of his as Mr. Couchman's-- passing. I have many fond memories of him. I am thinking of him and you all.

Reading about the full life that he had was an inspiration to me! I love you Aunt Claire and Uncle Rory, and Im praying for him and for all of you

I am so sorry for your loss Claire and family. Our prayers and good thoughts are with you and your family❤❤

Never miss an update about Colin. Sign up today.