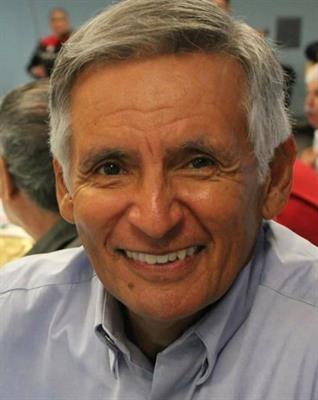 Weslaco/Mercedes - Daniel David Pineda, of Mercedes, Texas rode into heaven on Thursday, August 31, 2017 at his home in Weslaco, TX. He died of pancreatic cancer at the age of 69.

Daniel was born in Weslaco, Texas, on October 6, 1947 to Alejo and Rachel C. Pineda. The old-est of three children, he was raised on a farm outside Mercedes. He attended Mercedes High School, where he was president of the FFA. Upon graduation in 1967, he volunteered to join the United States Army, where he served with the 25th Infantry Division, Tropic Lightning, out of Hawaii. He served a one year tour of duty in Vietnam from January 1969 to January 1970, rais-ing to the rank of Staff Sergeant and being awarded a National Defense Service Medal, a Bronze Star Medal, and an Army Commendation Medal, among others. He was an M-14 Sharp-shooter and an M-16 Expert. He returned stateside to complete his military service at Ft. Ben-ning, GA and was honorably discharged from the U.S. Army in 1971.

Daniel returned to Mercedes, and he enrolled at Pan American University under the GI Bill. He graduated with a Bachelors degree in Sociology with a minor in History in 1977, and began his career as a social worker with Texas Child and Family Services. In 1981, he was hired by U.S. Postal Service, and worked as a letter carrier at the Mercedes Post Office for 34 years. During this time, he became known for going above and beyond his duties of delivering mail, providing excellent service to his customers, making sure they always had stamps and stayed cool during the hot summer months. Not only did his customers miss him when he retired in 2015, but so did the cats and dogs he befriended on along the way. It is said that there wasn't a customer or dog on his route who didn't like him, and he could be seen delivering the mail throughout Mercedes daily, followed by a pack of his furry friends.

As a veteran, a patriotic American and an avid motorcyclist, Daniel rode countless miles on his motorcycles, many of them in March during the annual Texas Vietnam Welcome Home Motor-cycle Run on U.S. Highway 83 from Perryton, Texas to Brownsville, Texas, in remembrance of Vietnam veterans who never returned home. He was also an active member of the Combat Veterans Motorcycle Association Texas Chapter 23-15, Rio Grande Valley, whose mission is to help veterans, and the Patriot Guard Riders, with whom he volunteered his time to escort deceased veterans to their final resting place.

Daniel spent many hours in his garage working on his bikes and on his '66 Mustang, in which he would take his daughters joy riding on the levees with a hardy "Whoa, Nelly!" and "Hi-oh-Silver, Away!" He was a lifelong fan of the Mercedes Tigers, the Pan Am Broncs, the Dallas Cowboys and George Strait. He also enjoyed The Lone Ranger television series, reading the morning paper with a cup of coffee, tending to his yard, traveling, and spending time with his family. Daniel will be remembered for his selflessness, sense of adventure, extraordinary work ethic, easy-going nature and friendly smile. He was a good man, and he will be missed very much by all those who knew him. We thank God for bringing him into our lives. The Pineda family would also like to extend their sincere gratitude to everyone who visited with Daniel during the final weeks of his life.

Daniel was preceded in death by his parents, Alejo and Rachel C. Pineda. He is survived by his wife, Anita, who was the love of his life, and with whom he shared 44 years of marriage, and by his two daughters whom he loved endlessly, Michelle Pineda-Anzaldua, of Mercedes, married to Tony Anzaldua, III, and Rachel Pineda, of Plainville, Connecticut, engaged to Joshua Woodruff, his four grandchildren Tony, IV, Daniel, Katarina and Austin. Also survived by his brother Saul (Joana) Pineda and his sister Elma (Mark) Raney, of Albuquerque, NM, his aunts, cousins, nieces and nephews, all of whom he loved and cherished enormously. He is also survived by his cat, Patches.

RIP Daniel Pineda! You were always a very nice and wonderful person! Although you are gone from this life you will never be forgotten! To all his family, my condolences and may God Bless you all with comfort and peace!

To Daniel Pineda, may you RIP! To Anita and his two daughters, may God Bless you with Peace, Comfort and many wondeful memories, to ease your pain. My condolences for the loss of a wonderful person! Sending prayers and hugs!

I am so sorry for your loss. What a wonderful person he was. He was my mailman and always very happy. Anita, Rachel, and Michelle, you guys were so blessed, you hold so many memories. Cherish them in your heart. God bless you Anita and daughters
Angelina (Angie) (ragetty Ann) Garza

I would like to extend my sincere condolences to the Pineda family, especially Mrs. Pineda who was my teacher when I was in grade school. I am so sorry for your terrible loss. This is not only a terrible loss for the family but also for a whole community. Mr. Pineda was...., well I don't need to elaborate on this. If you knew Mr. Pineda, you know what kind of person/human being he was. I have nothing but good to say about him.
The world, Mercedes, Texas and the US Post Office are...

Anita, Michelle, and Rachel,
We are very saddened to hear of Danny's passing. He was a very good person and will be missed by many. The beautiful words used to describe him show a dutiful, patient, kind, and happy person. Not many people can own up to these attributes. It is obvious that he had a wonderful life filled with love. Our prayers are for you that you are able to continue with your lives as he would want you to do.

Daniel Pineda RIP! My condolences to the family! May God Bless them all with strength, comfort and peace during this sad times. Sending prayers! I will always remember Daniel Pineda as a very kind and wonderful person.

My deepest condolences to the whole family.
May you rest in peace primo.
Angel Castaneda and Family

My condolences to Mrs. Pineda and family. RIP Mr. Pineda who Loved his work, family, and furry pets.

Our Lady Of Mercy Church