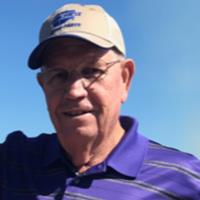 David Eugene Bates, age 75, went to be with our Lord on October 2, 2020. He was born May 8, 1945, in Detroit, Michigan to Ernest Lee Bates and Doris Ellen (Andrea) Bates. He was the second of three children with older brother Robert Edward Bates and younger brother Thomas Edwin Bates.

David graduated from Highlands High School in San Antonio in 1964 and St. Phillip’s College in San Antonio with an Electrical and Mechanical Engineering Degree.

David married Ellen (Slomchinski) Bates on October 8, 1966, with whom he had two sons, Jerry Lee Bates and Randall Ray “Randy” Bates. He loved his sons very much and was proud of both of them. He made every attempt to pass along his two passions to them both.  To Jerry, he taught all of the electrical and mechanical knowledge he could as that was his liking and to Randy, he taught his excellent marksmanship. To each of them, he instilled the love of the Lord and the Lord’s guidance, the love of our country, and the respect of others and their property. He always stressed they put their very best into whatever they were doing or performing. He absolutely made each of his sons walk the line. However, if you ask either of them today, they would state “he was not hard enough on them.”

David worked at a number of automotive dealerships including those then known as Hemphill McCombs Ford and North Park Lincoln Ford. In 1970, he started work for Missouri Pacific Railroad, now known as Union Pacific Railroad, as a Railroad Engineer. In 1995, he advanced into the management field of Union Pacific.  As a result of his electrical and mechanical knowledge, he scored high marks on all of the railroad and Federal Railroad Administration testing requirements. He wrote and revised many railroad rules and bylaws, some of which are still used today. He traveled throughout the UP and many other railroad systems in the United States and Canada. He also taught and troubleshooted railroad rules and regulations. He retired from UP in 2001 and later went back to work for them and other railroads as a consultant. Due to health reasons, he was forced to retire a second time from UP. At the time of his passing, he worked at Bexar Community Shooting Range in Marion for Vernon and Jennifer Winkelmann, his longtime close friends and moral supporters. He dined nightly and carried on conversations with the two of them and Ellen. The four of them would also meet up with Danny and Amelia Webb, another long time couple and shooting buddy with whom they traveled the world and back together. They traveled to Alaska, Canada, Italy, Spain, St.Thomas Cabo SanLucas and so many other locations. What a wonderful time they spent together and cherished so many memories.

For over 45 years, one of David’s favorite activities was to participate in Trapshooters. He thoroughly enjoyed traveling to various competitive events nationwide, especially with his brother-in-law, Joe Altom, and meeting new people. He was a proud member of the Amateur Trapshooting Association (ATA) and the Texas Trapshooters Association. He and Vernon were affectionately known as the “Laurel and Hardy Team” by visitors and shooters who came from all parts of the world to the National Shooting Complex where Vern had a vendor store.

He loved his daughters-in-law, his three grandchildren, and four great-grandchildren. He was also supportive of his nieces and nephews, both morally and in the rearing of some. They, too, had to walk the line while living with him.

David was preceded in death by his parents, brothers, and daughter-in-law, Sally (Roane) Bates. He is survived by his wife of almost 54 years, Ellen Bates, his sons, Jerry Lee Bates of Dickinson and Randy Ray Bates and wife Susan Bates of Boerne. He is also survived by his granddaughters Bronte McCoy, Mason White, and Mikayla (Roane) Sutherland and his great-grandchildren Tucker, Bonnie, Sterling, and Terra. He will be dearly missed by his immediate and extended family, a host of friends, and Sugar Bear, too.

At birth, we boarded the train and met our parents, and we believe they will always travel on our side.  However, at some station our parents will step down from the train, leaving us on this journey alone.  As time goes by, other people will board the train; and they will be significant i.e. our siblings, friends, children, and even the love of your life.  Many will step down and leave a permanent vacuum.  Others will go so unnoticed that we don't realize they vacated their seats.  This train ride will be full of joy, sorrow, fantasy, expectations, hellos, goodbyes, and farewells.  Success consists of having a good relationship with all passengers requiring that we give the best of ourselves.

The mystery to everyone is: We do not know at which station we ourselves will step down.  So, we must live in the best way, love, forgive, and offer the best of who we are.  It is important to do this because when the time comes for us to step down and leave our seat empty we should leave behind beautiful memories for those who will continue to travel on the train of life.

I wish you a joyful journey on the train of life.  Reap success and give lots of love.  More importantly, thank God for the journey.  Lastly, I thank you for being one of the passengers on my train.

Due to the new Executive Order from Governor Abbott, we are asking that everyone wear a mask during the visitation and burial. Anyone wishing to sign the online guestbook, share memories or issue condolences to the family may do so at www.hurleyfuneralhome.com

Dear Ellen and Family, My deepest condolences to you all. David was a fun, kind and sincere person. I know jow much he will be missed. God Bless and R.I.P. David

He was a very nice guy. Shooting range won't be the same without him. God bless him

I met David in the early 70's at the Ford and Lincoln Mercury Dealerships. He was one of the Best Mechanics and I enjoyed spending time with him. After my Sister, Gail , married she and Bill lived next door to David and Ellen in Leming. I always looked forward to seeing David and Ellen during the holidays when we would go my sisters house to visit. David was an awesome guy and will truly be missed. God Bless the Family in the time of need!!

David Bates was a good friend. After high school was as always busy, but back in the day boy did we have fun!! Where does time go? The last time we talked we were going to get together, well as always busy! David Bates will truly be missed, but not forgotten!!! Sherry and John Davenport Boerne Tx.

Prayers for comfort and mending grief in the days and weeks to come.

May the love of friends and family carry you through your grief. Our deepest condolences...John and Frankie Tinsley

Our continued thoughts and prayers. May God wrap his arms around your family and provide you comfort.

Ellen, Jerry and Randy we are so sorry for your loss. You are in our thoughts and prayers. Rob & Barbara Stetler