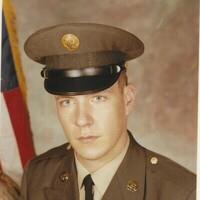 Dave, a resident of Middletown, DE was born in January of 1953 and raised in Newark, DE along with his four brothers and sisters by Willis and Elizabeth Jackson.

Dave enlisted in the United States Army shortly after high school and earned the rank of Sargent before being honorably discharged in 1977. After his time in the Army Dave spent most of his career working for New Castle County. In his spare time, he loved to fish, catch up with old friends from high school, and use his computer.

He was preceded in death by his wife, Sharon.

Dave is survived by his sons, David Jr. (Catherine), Taylor, his sister, Sally (Starr), and his four grandchildren, Giuliana, Connor, Chase, and Elizabeth.

A viewing will be held from 12 – 1 pm on Friday, September 10th at Daniels & Hutchison Funeral Home, 212 N. Broad St., Middletown, DE. A time to share memories of Dave will begin at 1 pm. Interment with military honors will follow at the Delaware Veterans Memorial Cemetery in Bear, DE.

I knew Dave thru New Castle County he worked with my late husband so glad I got to know him tell Wendell hello for me. Rest in peace Sandra Grinnage.

My condolences for Dave and his family. I worked with Dave for many years at New Castle County and always enjoyed our conversations. He was a happy and pleasant person and I feel fortunate to have known him. May he rest in peace.

My condolences for Dave’s family, he was such a nice fellow in high school. I know he will be deeply missed by his family and friends. Rest peacefully Dave.

My deepest condolences to Dave’s family. I hope that fond memories of Dave help comfort you at this difficult time. He was a true friend and is, and will be , greatly missed.

My heart is broken for your family. Dave was an awesome guy and I remember when I was in 5th grade and he was in 6th grade, he came up to me in the cafeteria & said, “ Hi! My name
Is Dave Jackson & I am your cousin” I had to go home and ask my mom if that was true.
My Mom (Eleanor Davis Buchanan) was best friends with her cousin, Willis, when they were growing up. They kept in touch until my Mom’s death in 2016. I am thankful we reconnected in the past few years & we...

To the family of Dave Jackson,
Dave was a sweet, caring and loving man. Dave and I were in the same homeroom all through school and I always admired him. He always treated everyone the same way he would have wanted to be treated. I will miss his late night messages to me via FB Messenger. :) Thank you for his military service in the U.S. Army. Dave will never be forgotten by me or the Christiana High School Class of 1971. Sending my prayers and love to his entire family. God...

Never miss an update about David "Dave". Sign up today.