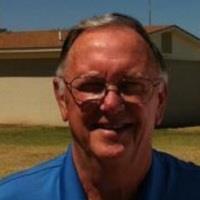 David was born on February 6, 1936 in Abilene, TX to Nadine (McMahan) and Alton Middleton.  He was a graduate of Haskell High School, Class of 1954 and a graduate of North Texas State University.  David married Martha Rose Ely in June 1956 in El Campo, TX.  They had three children, Michael, Cathy, and Alecia.  He married Patricia (Moore) in December 1974 in Houston, TX.  They had two children, Patrick and Stephen.  David loved to play golf, to read, and was a member of the First United Methodist Church in Haskell.  Most of all he loved to be around his family and friends.

David lived out his passion for educating and coaching men and women across the state of Texas for over 55 years. Coach spent many hours of his life on the football field, golf course, tennis and volleyball courts, but his first love was basketball.  He spent countless hours of his life building competitive basketball teams of character.  His teams were known for relentless defensive presses and innovative offensive plays.  He ended his career with over 900 basketball wins.  In 2009, Coach was inducted into the Texas Association of Basketball Coaches Hall of Fame.  He was selected to be the south boys all-stars coach for the Texas High School Coaches Association and the north girls all-stars coach for the Texas Association of Basketball Coaches.

Many of his players reached the collegiate level and many of his players and coaches went on to start their own successful coaching career.  All of his players learned more than just how to play basketball, they were taught valuable life lessons as well.  Coach loved each one of his players and unselfishly invested his life into each of them.  He set a wonderful example throughout his life on how to live, how to handle adversity, how to be humble in victory, and how to be gracious in defeat.

He is preceded in death by his parents, Nadine and Alton Middleton; and first wife, Martha Rose Ely; and two special mentors Coach Ray Overton and friend Woody Frazier.

Online condolences can be shared with the family at www.smithfamilyfh.com.

I was so sad to hear about David through the local newspaper The Facts. Your whole family meant a lot to me when you all lived in Lake Jackson. I used to babysit with you kids when you were little. Your mom was so precious ~ we loved her as well as your dad. Your dad was a great basketball coach for Brazoswood where my dad was the band director. You all attended the same church we did. I have fond memories of your sweet family. I loved reading about how your dad invested in his players...

David was a good friend to me and my family when we taught in side by side rooms on the third floor for 15 years at Klein Forest High School. He taught Driver’s Ed and I taught Algebra.he was always asking if we had found “x”! I met Patty, Patrick and Stephen while there. Our son, Roy who went to Cy Creek, flew with David out to Big Spring at least 2 years. He was a great mentor to him as well as all his student athletes. David will always have a special place in my heart.
.

I am so sorry to read of Coach Middleton's passing. He was a good friend, neighbor, and mentor for me when I was growing up in Haskell. I really appreciated him for many reasons but most of all because he was not judgmental. He accepted me as I was and not as what many wanted me to be. He knew that one had to pursue their own aspirations and not the aspirations set by others. Be assured of prayers in this time of need. Barry L. O'Neal,M.D.