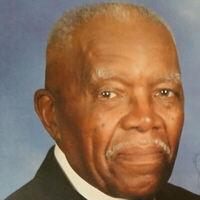 Our hearts are saddened by the passing of our loved one –Deacon John Wesley Ellis, Jr.

He attended Union Grove Elementary and graduated from George Washington Carver High School (located on the college campus of now Virginia State University) in the Chesterfield County Public School System. He served in the US Army and the National Guard. Furthering his career, he became the first black mechanic for Chesapeake and Potomac Telephone, and C & P Telephone Company, and retired with 35 years of service with only missing one day of work during his tenure.

Deacon Ellis accepted Christ at an early age and became a lifetime member of Union Grove Baptist Church-South Chesterfield. His favorite scriptures were Romans 8:31 and Philippians 4:13. He was a faithful, committed, and dutiful Christian worker for more than 75 years serving on the Deacons’ Ministry, Music Ministry, and in early years on usher board, junior choir, and other ministries. The following represents his legacy of service in the church—Deacons’ Ministry where he was the oldest deacon and served more than 50 years and was chairman for 5 years, Music Ministry where he began singing in the Junior Choir--he sang bass in the Senior/Sanctuary Choir, Male Chorus, Harold E. Braxton Memorial Choir and New Covenant Choir. He was a lead singer for selections like “Seeking For A City”, “When I Rose This Morning, I Didn’t Have No Doubt” and others. In addition, God gave him the gift of reading music and playing the piano. Deacon Ellis was the former church treasurer for 28 years, was currently a member of the Music Committee, Men’s Ministry, and Co-coordinator of the Revival Committee, Back-up for Trustees’ Ministry, van driver, and supporter of all church programs. He was also a former teacher of the Sunday School Young Adult Class.

In addition to Union Grove Baptist Church, Deacon Ellis worked with the Civic and Political Action Association of the Matoaca Magisterial District (CAPAAMMD) - a group that honored his dedicated service a few years ago. He assisted with the Downtown Churches Feeding Program in Petersburg, VA, and willingly sung with the United Fellowship of Church Choirs of Chesterfield and vicinity as sister and daughter churches worshipped. He was recently honored for community service by the Martha Mason Hill Memorial Foundation; and, he was the recipient of many awards and accolades from many affiliations. Deacon Ellis had a heart for others and was always willing to assist anyone wherever and whenever he could. He loved to hunt with the Salisbury Hunting Club, sing, watch his favorite football team - Philadelphia Eagles, and taking care of Brownie - a stray dog that stole his heart. Additionally, he enjoyed listening to CB radio and later scanners. He was a protector of his community.

Most importantly he loved God and lived by “ If I can Help Somebody as I Pass Along, Then My Living Shall Not Be in Vain”.

A Homegoing Celebration will be held on Saturday, October 24, 2020, 12:00 P. M. on the grounds of Union Grove Baptist Church, 19111 Church Road, South Chesterfield, VA, with the Reverend Dr. William E. Johnson, III, Officiating. Burial will be in the Goode-Ellis Cemetery, South Chesterfield.

TO THE ELLIS FAMILY, I WAS SADDEN TO HEREOF MR ELLIS PASSING. I HAD TO STOP AND THINK ABOUT MR ELLIS BECAUSE IT HAD BEEN SUCH A LONG, LONG TIME SINCE I MET HIM, BUT I REMEMBER NOW. I MET MR ELLIS AT SAULSBURY HUNT CLUB IN SURRY VA, A FRIEND MR HARRY PIERCE BROUGHT ME THERE.MR ELLIS TAUGHT ME FEW THINGS ABOUT HUNTING DEER. WHAT A WONDERFUL, WARM, KIND HUMAN BEING. I THANK YOU FOR THAT MR ELLIS. GOD BLESS YOU AND GRANT YOU THE PEACE AND REST YOU TRULY DESERVE.

In loving memory of a wonderful person. We will love you and miss you always. Rest in peace.

May your hearts soon be filled with wonderful memories of joyful times together as you celebrate a life well lived. God bless you and your family.

Our condolences to the Ellis family. Mr. Ellis will truly be missed in our community and at the various church program. His bright smile, encouraging words and beautiful singing will be what I remember the most. Praying for peace and comfort knowing that God can supply each of you will be in my heart. R.I.H. Mr. Ellis.

The kindest, most loving person you ever wanted to meet!!!! Truly he will be sorely missed in the Matoaca District and the Ettrick community. He was a strong civic and progressive action supporter in our community and in the Southern Chesterfield County Area as a whole. He truly loved this area and was a constant fixture at county/community meetings.....quickly shared his opinion/advice to all who listened....Condolences to his family and friends. Rest easily my dear friend....Deloris...

To Marilyn my prayers are with you and your family. Your dad will be truly missed giving his knowledge and wisdom, which i will always remember. Patricia Thomas, Harris and family