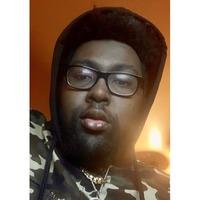 Please use the following link for live stream: https://youtu.be/0C5zEgpNnhk


Mr. Deonta Lamar Marshall was born January 25, 1996 in Flint, Michigan, the son of Larry and Myra Marshall. He was a life long resident of Flint and a 2015 graduate of Mott Middle College. After graduation he attended Mott Community College, graduating from the HVAC program in 2020. Deonta was employed at Home Depot and in his spare time he enjoyed playing his PS4.

The family would like to express special thanks to: Sheldon T. Banks Funeral Chapel.

I was so saddened to hear of Deonta. My heart is heavy and my heart goes out to you and family. I remember when my son would come to spend summers every year with his Grandmother. And how those two would play together by riding bikes and playing on their game systems, even sharing a few birthday parties, just simply having fun. As they got older, their connection lessened. But last summer while we were visiting, Deonta came over and they were talking and laughing for a good while until dark,...

I give my heart to you Marshall Family for staying strong and well put together in times of need! May God Bless yall family!

My condolences to The Marshall Family and Friends...

My condolences to Deontas family. I worked with Deonta at Home Depot. He was a very polite and kind young man and always willing to help out when needed. I will miss him! RIH Deonta!!

I am sorry to hear of Deonta passing he was a nice young man . Your family have my sympathy. Helen McBride

Prayers go out to the Marshall family

Your going to be missed alot you are my 2nd Son from another Mother from Headstart with DeMarcus til now. We Will meet again

To the Family of Deonta Marshall I'm so ever grateful for the opportunity of knowing him he was an amazing and awesome student very respectful and considerate and hard-working he will be truly missed Staff and students that knew him at Brownell Bulldogs Elementary School Staff and Students Deonta I Thank God for the life he's giving you with us love Ms. Allen❤

Never miss an update about Deonta. Sign up today.