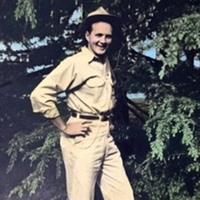 Donald Steele Bell, 86, passed away at Baptist Memorial Hospital-North Mississippi on February 15, 2021, after an extended illness. He was born to the late Walter Otto Bell and Ibbie Irene Belk Bell on April 26, 1934, in Ethel, Mississippi.

Don was a very patriotic man serving with loyalty and devotion to his country and mankind. He entered into the United States Army on October 17, 1958 and later transferring to the Mississippi National Guard, Unit 223 Engineering Battalion. He served over 22 years of service to his country and the military.

Don began his dedication to serving and service at a young age, starting with singing in the National FFA chorus in high school and attending Boy’s State while in high school. Don attended Holmes Community College from 1952 to 1954. Upon his graduation he enrolled at Mississippi State University where he received his BS Degree in Forestry in 1956. He was a member of the first class from the new forestry curriculum.  Don continued to expand his education by attending many forestry workshops.  His work career began with the Jimmy Henley Lumber Company, while still a student as MSU. Upon graduation he worked at the D. L. Fair Lumber Company as their forester, Georgia Pacific, and Weyerhaeuser as their forester and later as their raw materials manager. After 22 years of working for others he began his private consulting career as a forest manager founding Donald S. Bell and Associates in June 1978.  After another 22 years he sold his business but continued to work part-time with Bell Kirkland and Associates.

Don was an active member of the Bruce United Methodist Church, where he served in various positions in the church.  He served on the Administrative Board, Sunday School Teacher, Choir Member, Finance Committee, and Chairman of Calhoun County Methodist Cluster.

Don was an outdoorsman’s he loved hunting deer, rabbit, and quail and if he were not hunting you could find him fishing.  He was also an avid MSU sports fan.

Memorials may be made in Don’s memory to the Bruce Chamber of Commerce, the Bruce Museum or the Bruce United Methodist Church.

Parker Memorial Funeral Homes of Bruce and Vardaman are honored to serve the Bell family during this difficult time.

I met Don (Mr. Bell) when I was a graduate student at MSU in the late 90s. I have very fond memories of chats with him and have thought about him often over the years. It's been many years since I've spoken to him but the memories persist. My thoughts and prayers are with the family.

A trooper for Bruce loved his town and served it well.

I'm so sorry for your loss. Even though my time with Mr Don was short I truly enjoyed caring for him. He was definently one of a kind. Ms Billie,Barbara, Sharon,Donna & Penny thank you so much for allowing me to care for Mr Don. I know he is at rest with our Lord. Due to icy road conditions I will not be able to attend the services today please know that all of you are in my thoughts & prayers. Please take care & be safe. If there is anything I can do please don't hesitate to...

So very sorry to hear about Mr. Don... Sweet man who loved his family so much !!! My thoughts and prayers are with each of you today, and the days to come..

Sorry to hear about your loss. Praying for you at this time.

In loving memory of a wonderful person. We will miss Don, Thankful for the knowledge of forestry that he shared with all. He will be missed.

Don always acknowledged me and gave me the feeling that he cared; and he did. Don was very well respected as not only a citizen of our community but as a servant of his Lord. I pray that good memories will displace sorrow and give you peace and hope. Psalm 116: 15 says "Precious in the sight of the LORD is the death of his saints."