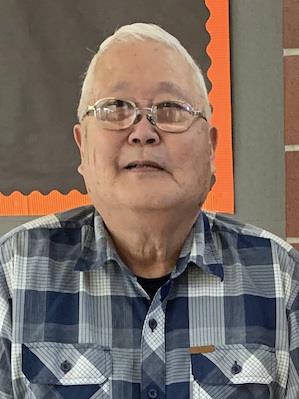 Mt Angel - Donald Kazuo Wada passed away peacefully in his sleep on July 23rd, 2020 at his home in Mt. Angel, OR. Don was born on Christmas Eve in 1943 at the Gila River Japanese Internment Camp in Arizona to Robert and Teiko Wada. Upon his family's release, they returned to the Bay Area where they started their life again in Mountain View, CA. Don was an accomplished Little League pitcher as a boy in Mountain View where he relied on a screwball to carry him to several no-hitters. It was at this age that Don became a devoted and life-long San Francisco 49ers and Giants fan. He continued to play baseball and basketball on his way to earning his diploma at Mountain View High School. After high school, Don enlisted in the United States Marine Corps Reserves, where he served honorably for two years. Don utilized his artistic talents as a professional florist in San Jose, CA. It was during this time that Don married his first wife, Donna, who gave birth to his two beloved daughters, Megan and Meredith. After suffering catastrophic vision problems that nearly left him blind, he was forced to retire as a florist and begin a new career. Along with his second wife, Karen, he built a very successful local landscape and gardening business from scratch, starting with a lawnmower he received from his father. Don was an avid golfer during this time where his long drives were on display at the many courses he frequented in San Jose and on the Monterey Peninsula, including Pebble Beach. After a successful second career, Don sold his business and retired to Mt Angel, OR to be closer to his daughters and his grandchildren. It was there that he once again built a rich and full life for himself. Don was a pillar of the Edelweiss Village community where his generosity was only exceeded by his friendliness. His passion for giving back to his Mt. Angel community was on full display through his volunteer work with the St. Joseph Shelter Mission Benedict, the Providence Benedictine Nursing Center, and the Mt. Angel Senior Center, where his sense of humor and charm brightened the days of employees and patrons alike. In 2011, his extensive volunteer work was recognized when he was honored with the Mt. Angel Chamber of Commerce Volunteer of the Year award. The greatest passion of his life was showering those he loved with his unmatched generosity. There were no greater objects of this generosity than his two daughters and five grandchildren. His love for them and pride in them had no limits, as anyone who knew him can attest. Don faced all that his very full life had to offer, both the joys and the challenges, with the same light-hearted warmth and marginally appropriate sense of humor that all who knew him came to cherish. His compassion and generosity will be greatly missed by all who had the privilege of having him in their life. There were few people he didn't like, fewer still who didn't like him, and none for whom he held no place in his heart. The bright light that was Don may have faded away but it will continue to be reflected in the many people who shine more brightly because they knew him. Don is survived by his mother, Teiko, his sisters, Ellen Phillips and Elaine Snoeck, his daughters, Megan Kaplan and Meredith Eggert, his sons-in-law, Dan Kaplan and Matt Eggert, and his grandchildren, Sophia, Nathaniel and Ruby Kaplan, and Owen and Audrey Eggert. He was preceded in death by his father, Robert. The family plans to hold a Celebration of Life gathering for all who wish to attend once that can be done safely. This will likely be held next summer. In lieu of flowers, donations to the Mt. Angel Senior Center and the St. Joseph Shelter Mission Benedict are greatly appreciated. Arrangements are by Unger Funeral Chapel.