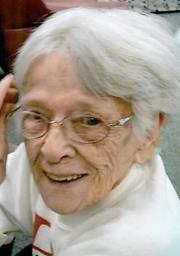 Dorothy A. "Dot" Anthony, 94, of Dutch Hill, Parker, passed away Monday evening, Nov. 25, 2019, at her daughter's residence in Parker following an illness.
Born March 24, 1925, in Dutch Hill, Perry Township, she was the daughter of the late Chester R. and Cora Etna Gallagher McCoy.
Following high school, she became employed by the former Knox Glass Corp., (later Glass Containers) of Parker, where she worked in the glass decorating department, retiring in 1957.
She was a longtime affiliate with the Church of God at Dutch Hill (now Park Hill).
Dot was an artist in the art of quilting. She created and finished over 200 quilts. Folks from as far away as California, and many locals, would begin a quilt and then deliver it to her for her to finish their quilts. That number reached well over 200.
A strong supporter of her husband in his work with VFW Post 7073 at Parker, she served as president, treasurer and conductress of the former Ladies Auxiliary at 7073, as well as poppy sales chairperson for many years. Additionally, she held chairs in County Council (VFW) and was a member and past president of the 26th District VFW Ladies Auxiliary. She was also a member of the former Ladies Auxiliary of American Legion Post 598 of Parker, and the Lady Rebakah Lodge of West Freedom.
In addition to caring for family, working, and serving the veterans organizations, Dot could be found several times a week at many of the local bingo fundraisers.
Surviving are a daughter, Carolyn (Howard Lubbert) Brown of Parker; a son, Kevin (Lucinda) Anthony of Parker; four grandchildren, Crystal Over, Melody Nordquist, and Josh and Cody Anthony; six great-grandchildren, Tabatha Saye, Caitlin Nordquist, Carly and Abby Over, and Gunnar and Oakley Anthony; and a number of nieces and nephews.
She was married on July 2, 1943, to John A. "Banjo" Anthony, who passed away Feb. 27, 2016. They had been married nearly 73 years.
She was the last surviving member of the McCoy children and was preceded in death by her sister, Geraldine Master; and her brothers, Wade and Tom McCoy.
ANTHONY - Visitation for Dorothy A. "Dot" Anthony, who died Monday, Nov. 25, 2019, will be held from 2 to 4 and 6 to 8 p.m. Friday at H. Jack Buzard Funeral Home, 201 S. Wayne Ave., Parker, where a funeral service will be held at 11 a.m. Saturday.
Burial will follow at Parker Presbyterian Cemetery.
To view or to send condolences, sympathy cards or flowers, please visit www.buzardfuneralhomes.com.

Kevin,Lucinda,Josh,Cody and families,
Sending our deepest sympathy to all of you at this difficult time. I know you have many memories to cherish forever in your heart. She was a great lady. Keeping all of you in my thoughts and prayers. Love
Nancy,Rich,Tara,Bella and Olivia Wagner