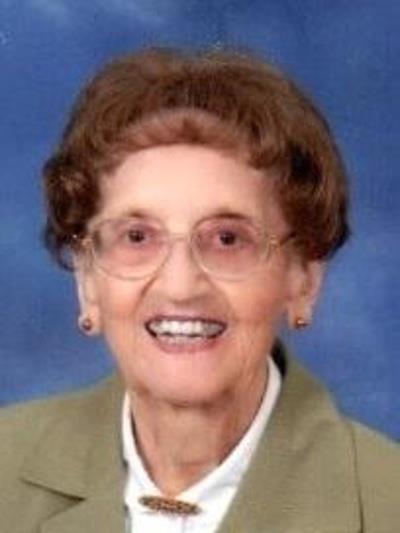 Dorothy Alice “Dot” West passed away on Saturday June 15, 2019.  The oldest child of Annie and George West, Dot was born April 1, 1920 in Philadelphia, PA.  The West’s, including her beloved brother, George Henry Jr. moved to Jacksonville, FL when Dot was a young child.  Dot graduated from Andrew Jackson High School before attending Florida State College for Women in Tallahassee, FL, where she graduated with a Bachelor of Music Education Degree.  In 1955, Dot received her Masters of Religious Education from Union Theological Seminary in New York City. Dot learned to play the piano at the age of eight.  She entered many State Music Association contests and won quite a number of them.  Dot taught the second and third grades at an elementary school in Baldwin, FL and one semester of music at Kirby Smith Junior High in Jacksonville, before becoming the Director of Christian Education at the Church of the Good Shepherd on Stockton St. She also served as Director of Religious Education at St. Matthew’s Episcopal Church, Richmond, VA; Christ Church, Charlotte, NC; Church of the Nativity, Huntsville, AL and Christian Education Director at St. John’s Cathedral, Jacksonville, FL.  At every church that Dot attended she made friends and they became like family.  Thus her “family” kept growing so her family was an important part of her life.  She chose not to be ordained because she felt that clergy needed a strong support of the laity.  Dot then worked as the manager of the Episcopal Book Store for the Diocese of Florida which gave her an opportunity to work with many different parishes and clergy in and around the Diocese of FL.  After retiring, Dot served as Assistant Chaplain of the Memorial Hospital Volunteer Axillary for twenty-three years.  Dot was a life-long member of St. John’s Cathedral, a member of the American Association of University Women, and the Japonica Garden Circle.  She attended Cursillo #1 and served as Director of several summer sessions at Camp Weed.  Dot also traveled extensively with her brother, George Henry.  Dot is survived by a cousin, Norman West (Mary Ann) of Chicago, IL and an “adopted” daughter, Nancy Pace Ford (The Rev. Bruce M.) of Jax, FL.  Funeral Services will be held Saturday, July 13, 2019 at St. John’s Cathedral at 11AM, with a reception held in Tallaferro Hall following the service.  The Reverend Edward H. Harrison will officiate.  Interment will take place in the Evergreen Cemetery.  In lieu of flowers memorial donations may be made to St. John’s Cathedral, 256 E. Church St. Jax, FL 32202, Camp Weed and Cerveny Conference Center, 11057 Camp Weed Place, Live Oak, FL 32060 or Kanuga Conference Center, 130 Kanuga Chapel Dr., Hendersonville, NC 28739.

Our sincerest condolences to all who are related and to the Fords who were considered Dot's family. We also send condolences to the many friends that serviced Dot in many ways, we are all in mourning!

Please accept my sincere condolences to the family and friends. Losing a loved one in death is never easy. May the hope of everlasting life sustain and comfort you during this difficult time. (John 17:3)

Expressing my deepest condolences to the family. May you find comfort and peace in God's word and always remember his promise:"Do not be afraid, I will help you."
Isa.41:13.

We are so very sorry to hear about your loss! May all of you find peace and comfort in all of the beautiful memories that you've shared together. Please take care.

when someone we love falls asleep in death the memories we have of them become our treasure, may those cherished memories of a life well lived and God's promise at (John 6:40) bring you a measure of comfort and peace. Please accept my deepest sympathies.

Never miss an update about Dorothy "Dot". Sign up today.