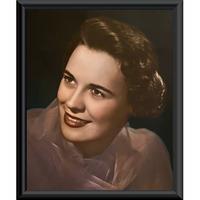 Dorothy Jean "Doti" English, 88, of Georgetown, Texas, passed away Wednesday, August 25th, 2021. She was born in Montalba, Texas - Anderson County on July 29, 1933, to Conard and Syble Henry. Her sister Carolyn June Henry passed away when they were teenagers.

Dorothy first worked as a runway model in Dallas, Texas, however, her love for travel quickly led to her position as an air hostess before taking on a corporate executive position at Continental Airlines that grew into an eighteen year career. She enjoyed traveling with her mother around the world and eventually she flew her three children all over the United States, as well as internationally, including adventure trips to Europe, Africa and Asia.

Walt Disney was once a passenger on a flight with Dorothy and sketched a personal memento on canvas for her while in-flight before signing the piece, which she kept framed in her home. Through her work, she had the opportunity to meet legendary people such as John Wayne and Lucille Ball, to name a few. She eventually became an independent business woman and later, along with her former husband, Harry English (deceased), they owned and operated Gallery E, an art gallery and frame store located in Wichita Falls, Texas for over a decade. Dorothy moved to Georgetown, Texas in 2003 where she authored her book, Turbulence, published in 2013. She resided in Georgetown until her passing.

She was survived by her two sons, Steven (Jolonda) Gray and Michael (Elizabeth) Gray and her daughter, Rebecca (Peter) Grossman, as well as her two grandchildren Alexis and Nicholas and many loved family members. The celebration of life and burial will take place at Friendship Baptist Church, 7220 FM 860 Montalba, Texas 75853 on Saturday, September 25th, 2021.

Family and friends will meet for the chapel service at 10:00am. Burial and reception to follow at Rock Church Cemetery. Fond memories and expressions of sympathy may be shared at Friendship Baptist Church  https://friendshipbchurch.weebly.com/ for the family.

Arrangements have been entrusted to Bailey & Foster Funeral Home.

Fond memories and expressions of sympathy may be shared for the family in our guestbook above.

In loving memory of a wonderful mother. We will love you and miss you always.