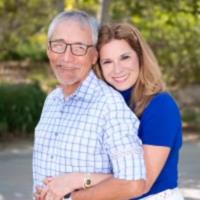 Andy was born March 22, 1948, in Lima, Peru, to Dr. Antenor Velazco and Elisa Castro. Andy came to the US when he was 16. He attended the University of Southern Mississippi where he excelled.  He enjoyed reading all the course work early and asking the professor to give him the final exam on the first day of class. His professor once told the class that Andy outdid them, without even speaking English!

Andy returned to Peru in 1970, where he studied at the Universidad Nacional Mayor De San Marcos. He earned his Doctor of Medicine degree, graduating in the top 10% of his class. While in Peru, Andy first became a father. Son Geoffrey Antenor was born in 1970. His daughter Kristin Elisa was born. Andy worked at a Pediatric Orthopaedics and Spine clinic in Peru until 1978.  After her birth, Andy and family returned to the US where he completed his surgical internship and residency in Orthopaedic Surgery at Emory University School of Medicine in Atlanta, GA.

As an Emory Resident, he met Kathy. She thought he was cute. One day he asked if she was going to a coworker’s party, and she said, “Yes.” He said: “Good. Then I’ll go too.” Family lore is that he sat next to her at the party and put his hand on her knee. The rest is history.

For much of his career, Andy worked as an orthopedic surgeon and hand and spine specialist. He was affiliated with Henry Medical Center in Stockbridge, Spalding Regional in Griffin, and Southern Regional Medical Center in Riverdale, GA. He lectured and organized seminars on orthopaedics, sport injuries, unstable pelvic fractures, and more. He authored multiple publications, papers, and editorials. At Atlanta restaurants, former patients would recognize him and tell his family how he had saved their life. Even if he didn’t remember their names, he always remembered their ailments and treatments.

When he retired from Resurgens Orthopaedics at the age of 65, Andy founded Orthopaedic Solutions with partner Dr. Radhakrishnan V. Nair. Andy continued to practice for the next 8 years and retired at the end of March 2021.

Kathy was born September 11, 1955, in Bethesda, Maryland, to Dr. Thomas and Georgia Hartney. Her father was a physician in the U.S. Navy who retired to Tampa, FL, in 1967. Kathy’s love of water sports grew from water-skiing on Lake Carroll.

Following her Masters, Kathy worked full-time as an anesthetist at Grady Memorial Hospital. Never one to rest on her laurels, in 1981 she matriculated to the Emory University School of Medicine. While in medical school, she worked as a Physician’s Assistant in Anesthesia and was on the Emory Faculty from 1981-82. She married Andy in 1982, gave birth to her first daughter, Kari Dyan, in 1984. Also in 1984, Andy and Kathy bought a land lot on Lake Spivey and began building their forever home. It became the site of many great parties and family gatherings, creating wonderful memories for multitudes of people over many years.

Kathy received her Doctor of Medicine degree in 1985 from Emory University while pregnant with her second daughter, Katie Dawn. Kathy specialized in Outpatient Surgery Anesthesia and Pain Management during a fellowship year. Always multitasking, Kathy gave birth to Alec Bryant in 1988 and completed her residency in Anesthesiology in 1989. She worked as an anesthesiologist at South Fulton Medical Center in Atlanta for the next four years.

In 1993, Kathy founded Capitol Anesthesiology, P.C., to meet the needs of the ambulatory surgery patient (forming companies when she saw an unmet need became her forte). In 1996, Kathy was recruited by the Joint Commission on Accreditation of Healthcare Organizations and became a surveyor in their ambulatory division.

Over the next several decades, Kathy was affiliated with multiple medical and surgery centers across Georgia. When asked if she ever planned to retire, her immediate answer was: “Nope.” She loved what she did, and she excelled in every endeavor.

Andy and Kathy— an example of love for four decades.

As a couple, many people said there were no two people better suited for each other. Both the eldest children of doctors, they were fearless and tenacious in everything they did. It was this trait that made what happened outside of their careers nothing short of amazing.

Andy raced, in cars and on foot. When he first moved to the US, he would say that he wanted to be successful enough to buy a Ferrari. He bought his first in the early 1980s, and we believe this drove his love for speed. He drove Ferraris, Lotus Sevens, Formula Fords, and Formula Mazdas; he raced in multiple series and had over 16 podium place finishes. The pinnacle of his career culminated in 1996 when he won first place in the South Atlantic Road Racing Championships at Road Atlanta and finished 3rd overall in the 1996 Regional Championship.

Andy picked up running in 1986 when a friend dared him to run a 10K. This turned into a passion for long-distance racing. His first marathon was the 1991 New York City Marathon (time 4:36:36). In his lifetime, Andy ran over 350 marathons and 100 ultramarathons. He lured Kathy into running with him by promising her they would travel and that he would buy her a charm for every state they ran in. The joke would be on him, as Kathy finished a marathon in all 50 states five years after he achieved the same feat. What started as a marathon charm bracelet turned into a charm belt as Kathy went on to finish more than 100 marathons. Their running took them around the world, their children and Kathy’s siblings joining them for many races over the years. Andy ran the Disney marathon 28 years in a row, one of the few people who had an unbroken streak since the Disney marathon was founded. He was passionate about running and the science behind it, researching and writing articles for several prominent running periodicals.

Andy’s top running accomplishment was completing the Badwater Ultramarathon in Death Valley, CA. This elite 135-mile road race is in one of the hottest locations on earth and spans from the lowest evaluation to the highest in North America. Badwater is one that very few people finish. It requires intense training for both the heat and the elevation. In 2003, Andy successfully completed the race with a time of 48:51:13. He returned to Death Valley many times over the years to serve on the crew for various running friends, helping them achieve the same success.

When asked what goal he wanted to tackle next, Andy said: “I would like to complete an Ironman. But first, I need to learn how to swim.” Eleven months later, Andy completed his first Ironman.

While Kathy joined Andy on many of his races, she also had her own passions. She was an avid tennis player until tennis elbow forced her to tackle another sport. Being a business owner, Kathy took up golf as she knew many business relationships happen on the golf course. As she always strove for perfection, she began reading all she could, took lessons, was often found at the golf range, and eventually played at over 50 courses around the country.

Andy and Kathy’s next pursuit took them off the ground. Andy had always been fascinated with flight. When he told Kathy he wanted to learn how to fly, she started working towards her pilot license also. She had grown up watching the Blue Angels with her family and had herself been interested in pursuing a career as a pilot from a young age. Over the next 13 years, they spent countless hours in the air. Andy loved the challenge of flying, and Kathy loved visiting more people and places. They each attained various levels of airplane and instrument ratings. Never one to stop at mid-level, Kathy was in the process of getting her commercial’s pilot license.

Andy and Kathy were easily the most interesting people in any room. They alpine skied, scuba-dived, sky-dived, and shot guns at the range. They exercised daily, often out-running or out-doing their children who they often cajoled into exercising with them.

Andy was known for his sarcastic wit, crazy stories, and fanatic exercising. He would do one-handed pushups in the break room between surgeries. He could often be found with a book in his hand or taking ‘micro naps’ without missing a thing.

Kathy had a magnetic personality and loved fiercely. Kathy could light up a room with her smile and vivacious personality. She drew people to her and had an infectious laugh. She treated everyone around her the same, regardless of their walk of life. Her fashion sense and passion for Louis Vuitton became the stuff of legends, as she almost always wore a LV purse with matching belt and shoes. In her honor, the Louis Vuitton’s Lenox Mall store threw her a 50th birthday party! She was known for her generosity and always wanted to share everything she had, including Peloton bikes, with the people she loved.

Their lives were interrupted and left unfinished. Andy had just started a hobby of woodworking and was reading a book about how to grow bonsai trees. Kathy was planning their next trips to visit more family and was so excited about her future grandchildren.

Their family and friends are heart-broken.

Family and friends are invited to celebrate Andy and Kathy at a memorial service on July 3, 2021, between 1-4 pm, at Eagles Landing Country Club in Stockbridge, GA.

“Injuries have been always the price of doing stuff, and life without stuff probably would be boring.” – Andy Velazco

I will forever miss you, my "seester", and my "alien", other worldly Andy Words cannot describe the depth of the hole in my heart. I love you both and will never forget all the memories we made. Rest in peace. Carol

It was a pleasure knowing and working with you both. Rest in Paradise together. Terrie Hill

I was a nurse at Perimeter Surgery Center many years back and met Kathy there. Later, we worked together again at Woolfson. I absolutely loved her! She was giving, humorous, and a great friend! I will miss her smile. May God wrap his arms around all of you and comfort you through this difficult time. Prayers to all of you. ❤

I worked with Dr. Kathy at the Gainesville Surgery Center in Gainesville, GA. Dr. Kathy was always very kind and generous, very approachable and "down to earth." I have known Dr. Kathy since 2006 when her anesthesia group took over the anesthesia department of the GSC. Each time she came to the GSC, she would always greet me with a warm hug and ask how I was doing as well as my family. Dr. Kathy was always very generous in showing her love and appreciation for all the employees at...

Her pilot friends at the Georgia Flying Belles of the Ninety-Nines miss her. Blue skies and tailwinds to you both.

I like everyone else was shocked by their death . Although I didn’t know all these things written in their obituary about them, having serviced their home for many many years I was always amazed at their hectic schedule. I watched their kids grow up and I can truly say even though the kids had the best of everything they were respectful and polite not spoiled. I guess you could say that was the result of the two great parents that raised them and that is another accomplishment you could...

I worked at Perimeter Surgery center for 10 years. Kathy's Anesthesia group ran the Surgery center. I absolutely love Kathy. She was kind giving individual. She will truly be missed. Love Val.