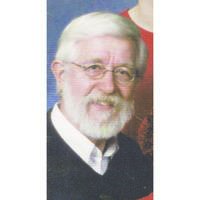 He earned a bachelor’s of science degree from Sam Houston University, a master’s from South Dakota University, and a Ph.D. from Southern Illinois University. He retired from Murray State University after 33 years of teaching and was Residential Head of Clark College for 13 years. He was a dedicated mentor to his students and felt that if a student failed, he had failed. He put his heart and soul into making Clark College a home away from home and a supportive community for all students. He attended First Christian Church where he made many caring friends.

He loved teaching, classic Jaguars, raising farm animals, carpentry and afternoon tea with shortbread. He was a world traveler and adventurer. He was known for his English wit and humor. He never lost his accent or love of the English countryside. He was proud of his family printing heritage. His father and all three brothers were in the printing field their entire careers. At the age of 23, he disembarked from the Queen Elizabeth II with $100 in his pocket and in his words, “achieved the American dream.”

He was preceded in death by his parents, and a nephew, Simon Horwood.

A celebration of life with a British tea will be held on his birthday from 2:00pm to 4:00pm Saturday, September 4, 2021 in the community room of the First Christian Church in Murray, Kentucky to share memories and stories.

Blalock-Coleman & York Funeral Home is in charge of arrangements.

Angela....hate to hear about the loss of Steve...you are in my prayers!

So sorry to hear of Steve's passing. Terry and I send our sympathy to Angela, Colin, and the extended family.

So many fond memories of Steve. Will always be my privilege to call him teacher, mentor, and friend. He instilled in me a love for travel, appreciation of life beyond our shores, and for that I’ll be forever grateful. His memory lives on in the stories I’ve shared with my children as they go through their own university experiences. He was one of a kindand we’ll all miss him.

Our deepest sympathy to the family. He was always a gentleman and kind to be around. May the memories you shared bring you comfort during the difficult days ahead.

Steve's British wit was greatly appreciated by his many friends, He will be missed.

Steve and I were colleagues and good friends during my time at Murray State University. He was a really good guy and I know he will be missed by everyone who knew him. He once told me that he had grown up in England but decided to take off to explore the world. He said he felt very grateful to be living in the United States because of the opportunities available to a person who was willing to work. I always thought that Steve believed the situation he found himself in at Murray carried...

A great teacher, friend, and administrator. You will be missed.

So sorry to hear this. Just saw him last week at Krogers. I got a big hug and his beautiful smile. May he rest in peace. My Love goes out to his family

I wish you peace, strength, and many happy memories during this sad time. I will always be thankful for Dr. H sharing his knowledge and for helping me see it was possible to create a better life for myself and my family and to not give up. He will be truly missed.

Never miss an update about Dr. Stephen. Sign up today.