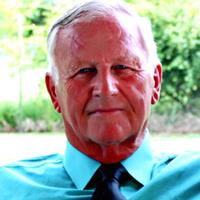 On Friday February 26th, 2021 DuWayne Alfred Holm, loving husband, father of three, grandfather of twelve, and great-grandfather of 4 passed away at the age of 80. Born on January 3rd, 1941 to Alfred Johannas Holm and Helga Hegvik in Lisbon, North Dakota, DuWayne spent his childhood as a typical farm boy working in the field and hauling cattle to Fargo with his father. DuWayne spent three and a half years stationed in Germany while serving in the United States Army, guarding the build of the Berlin Wall (the same wall his eldest, Monte, guarded as it was torn down). DuWayne Alfred Holm and Phyllis Jean Larsen married on July 14th, 1962 in Jamestown, North Dakota where they started their family of three sons, Monte, Kevin and Ryan. DuWayne was a man who worked hard as a professional autobody technician. He only took time away from work to golf with his friends and, most importantly, to spend time with his family. DuWayne is most known for being an all-around family man. During the youth of their 3 sons you could find DuWayne and Phyllis at booster club meetings, cheering in the stands of Camp Verde High School football games and wrestling matches, and watching their sons ride motorcycles. The joy of spending all of his time playing with (and ‘tagonizing) his grandchildren knew no bounds. DuWayne was preceded by his father Alfred Johannas Holm, his mother Helga Hegvik Holm, and his two sisters, Shirley and Sheila. He is survived by his wife Phyllis Holm, his siblings Dennis, Sharon and Joann, his sons Monte (Paula), Kevin (Susan) and Ryan (Tammie), as well as the legacy of Holm grandchildren and great-grandchildren.
In lieu of flowers, the family asks that donations be made to the Alzheimer’s Association on behalf of DuWayne Alfred Holm.

DuWayne was about the kindest man you'll ever meet. He meant a lot to me and our family. I have never seen a man so in love with his wife after so many years. He always seemed "smitten". I loved that about him and just how kind he was.

Duwayne will always be in my memory. I think about all the things we did and tried to do. Everyone called us the Norwegian and Polock. Will always miss you Du.

Never miss an update about DuWayne. Sign up today.