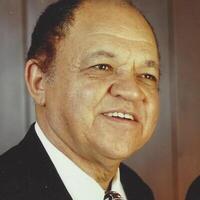 was one of twelve children with humble beginnings. He worked on the family farm

and attended local schools. At the age of 19, Earl moved to Fort Worth, Texas and

worked as Sky Cap for Delta Airlines at Meacham Field Airport. Earl was a hard

Earl was drafted into the U. S. Army on June 4, 1952 from Los Angeles, California

during the Korean War era. After 8 weeks of Infantry Training at Camp San Luis

Obispo Signal Corps Base, Earl was trained as a Teletype Operator, where he

excelled and was later selected for leadership training. After completing leadership

training, he became an instructor for new recruits in teletype technology. Later, he

dollars worth of electronic equipment. As a result of his hard work and dedication,

During his time serving in the U.S. Army, Earl started to experience challenges with

his eyesight and he was diagnosed with Macular Degeneration in early 1954. Earl was

later discharged from the U.S. Army at Fort Sheridan, Illinois on June 3, 1954. While

at Fort Sheridan, Earl studied and passed the GED examination prior to receiving an

Angeles, California where he received his high school diploma.

In 1954, through a mutual friend Earl was introduced to Dolores Troy, and according

to Earl, it was love at first sight. After 3 years of courting, Earl married the love of his

life Dolores Mae Troy on July 28, 1957. Earl and Dolores were blessed with three

sons: Shawn, Brennon and Damien. Earl was a great provider and role model for

his sons. He was very disciplined, instilled a strong work ethic and was true to his

Enterprises which later became Hewlett Packard. He continued to work there until

1970 when he medically retired from the electronic industry.

In 1971, Earl and Dolores purchased an investment property on Imperial

In addition to being a business owner, he also held a real estate license and

new ways to grow his investments, as well as provide for his family. In 1994, Earl

Association for 18 years. He took great pride in being an advocate for blinded

veterans. He helped veterans receive the compensation they deserved. Earl had

a very giving spirit, always eager to help others as well as family and friends in

Earl and Dolores were married for over 58 years, before Dolores passed away in

2016. During their marriage and while raising their three sons, they lived life to

the fullest. They took their family on many wonderful vacations and dined at the

best restaurants. Earl and Dolores continued to visit a variety of cities and

countries around the world. Some of these destinations included; China, South

Despite being visually impaired, he never let it get in the way of him achieving

his goals and leading a successful life. Earl had many hobbies including singing,

fishing and telling corny Dad/Papa jokes. Also, he enjoyed listening to the radio

where he would tune into Dodgers games and the latest news. Throughout his

life he touched so many people, whether it was words of wisdom, providing a

listening ear, or even his no nonsense “it’s my way or the highway.” But despite

his sometimes-stern demeanor, he had a heart of gold and he truly loved his

family. His legacy will live on to those near and dear. Earl leaves behind his three

Adam, Alisande, Christian, Joshua, Jessica, Thaddeus, Dominic and his greatgrandson, Mateo. At this time, Earl joins his beloved wife, his parents and

several siblings, who have passed on into eternal life.