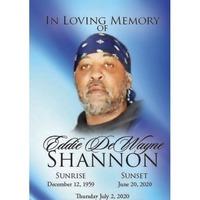 Eddie DeWayne Shannon, 60, was born on December 12, 1959 in East St. Louis, Illinois, to the union of Eddie Shannon and Dorothy Shannon. He departed this life on June 20, 2020 in the comforts of his home. He was preceded in death by both parents.

Eddie was raised in East St. Louis, Illinois. He was educated in the East Saint Louis public school district and he graduated from East St. Louis Sr. High School. He served 1 tour in the United States Army in 1978 and was honorably discharged. Eddie later moved to Springfield, Illinois where he worked for Springfield Urban league for 25 years. He later worked as a laborer for Maintenance Supply for over 15 years.

Eddie met and married Rachel Shannon in 1990. Eddie found joy in spending time and celebrating with family and friends. He loved to fish, which was a shared hobby with his father and brothers. He developed a passion for riding motorcycles and would often show off his bike to family and friends. He was always his happiest when he was able to surround himself with the people he loved.

"Blessed are those who mourn, for they will be comforted." May the Lord give you strength and bless you with peace. Always praying for you and family!

Grief can be so hard, but our special memories help us cope. Remembering our loved one today and always.

Enjoy your last ride, my brother, until we meet again. Love ya'

Let not your heart be troubled; ye believe in God, believe also in me. In my Fathers house are many mansions; if it were not so, I would have told you. I go to prepare a place for you. His mansion is ready Eddie just moved to a new house. R.I.P.

Never miss an update about Eddie. Sign up today.