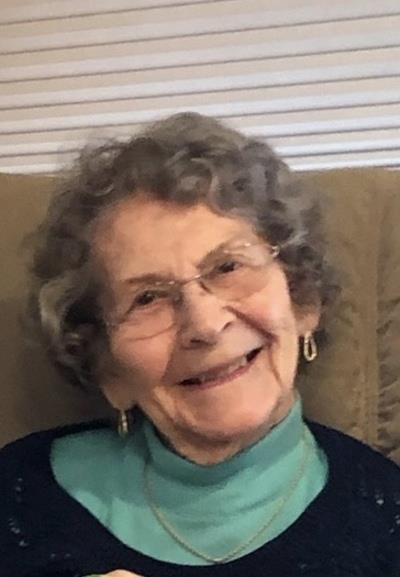 Edith “Edie” of Harwich passed away peacefully on May 6, 2021.  Born in Medford, MA on July 8, 1925, she was the daughter of Alfred Sandgren and Astrid E.M. (Liljegren) Sandgren.  Growing up, she was active in the 4H Club work and Girl Scouts.  She graduated Burlington High School, attended Burdett Business College, and pursued her career as a Secretary-Bookkeeper in the insurance agency field.

Edie was an active member of the Lutheran Church of the Redeemer, Woburn, MA for 55 years.  She was a Sunday School teacher, Choir member, Pastor’s Secretary and served on several committees..  Family was very important to her and she loved to cook, bake, sew, knit, garden, play bridge, Rummikub and read.  She was an avid Red Sox and Patriots Fan.

She married Malcolm McIntire (1948) of Woburn.  They resided in Reading, MA where they raised their four children.  Malcolm passed away in July, 1985.  Edie retired in 1988 and moved to Harwich where she became an active member of St. Peter’s Lutheran Church.  In 1989, Edie became a Volunteer in the Transport Dept. at Cape Cod Hospital, Hyannis, MA until 2019.

In 2001, Edie married Roger C. Peterson and they enjoyed traveling in the USA and Europe.  Roger passed away in 2008.

Edie leaves a brother, Stanley A. Sandgren (wife, Anne) of Woburn, MA, and was predeceased by a brother and sister-in-law, Alvan C. & Nancy Sandgren, and a brother & sister-in-law, Donald S. & Jeri McIntire, along with several nieces and nephews.

She leaves her closest and dearest friend, Joan Burgert of Eastham, MA and her close hospital volunteers.

A Celebration of life service will be held at a later date.  There will be a private burial service for the family.

To Kara Lee, Lynne, Bruce and Bonnie, my sincere condolences. I have many fond memories of both your Mom and Dad from all their years at Redeemer, especially their years singing in the choir. Faithful servants they both were. Now, at last, they're together again with Jesus.

This book of memories is to serve as a record of the services you entrusted to us. We hope it will help to preserve treasured memories and that we, in some small measure, have helped to ease your burden and bring you comfort.

Never miss an update about Edith. Sign up today.