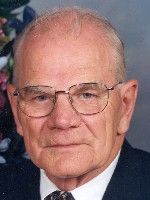 Larson Funeral Home announces the death of Edward Baumgartner, age 80, of Ortonville. Edward passed away on Saturday, August 6, 2011 at United Hospital in St. Paul, MN. Funeral services will be held on Saturday, August 13, 2011 at 10:30 at Trinity Lutheran Church in Ortonville. Visitation will be on Friday, August 12, 2011 at Larson Funeral Home in Ortonville from 5-7:00 PM with a prayer service at 7:00 PM. Visitation will continue one hour prior to the services at the church on Saturday. Pastor Tim Renstrom will be officiating and burial will be at Mound Cemetery in Ortonville. Edward F. Baumgartner, Col. (Ret), was born June 2, 1931 to Frederick and Alvina (Knopp) Baumgartner in Synnes Township, Stevens County. The family moved to Ortonville in April 1938. Eddie was confirmed in Trinity Lutheran Church on May 26, 1946 and was a lifelong member. In 1948 Ed began his long and distinguished military career. He graduated from Ortonville High School on June 3, 1949. He worked locally at the Coast to Coast store where he also began a career in the hardware business. In January 1951 he began his training in Field Artillery at Camp Rucker , AL. On October 19, 1952 he married Audrey Mitchell. They raised three daughters whom he loved spending time with. Ed trained at Ft. Sill, OK, Ft. Greeley, AK, and attended Command and General Staff College at Fort Leavenworth, KS. He worked his way up through the ranks in the Army National Guard and after 31 years of serving in the Field Artillery, he retired in April of 1980, well known as Col. Eddie. He had a passion for cars and woodworking, and enjoyed "tinkering" with both. Other hobbies he enjoyed were hunting, fishing, boating and relaxing at the lake, golf, reading, and spent a lot of time traveling. In later years he developed a very special friendship with Audrey Hanson and her family, Deb and Danielle Carlson, Lori, Rob, Blake and Claire Roettger, and LTC Steve, Julie, Erin and Lauren Hanson. They traveled, spent time at the lake, and golfed. Eddie was preceded in death by his parents, his wife Audrey, and one sister Evelyn Mack. Edward is survived by his daughters: Linda (Jeff) Melander, Sharon (Dan) Bogenreif and Sandy Baumgartner; grandchildren: Jodelle (Brian) Schroeder, Jerrod (Rachel) Melander, Jayson (Heidi) Bogenreif, Jessie (Brent) Pulskamp; Sidnie, Avery, Finley, Luke, Rowan, Skylie, Adam, and Briggs; sisters: Luella Mack and Marcy Holt; brothers-in-law: Duane (Marilyn) Mitchell and Dale Anderson; special friend Audrey Hanson and her family: Lori (Rob) Roettger and their children Blake and Claire, Steve (Julie) Hanson and their children Erin and Lauren and Deb Carlson and her daughter Danielle; and many nieces and nephews. Larson Funeral Home is in charge of arrangements for Edward Baumgartner. To send condolences to the family on-line, visit our website at www.larsonfuneral.com