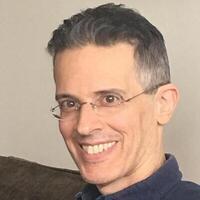 Ed was born on October 10, 1958, to Vito and Madeleine Darmiento in Brooklyn, NY.  After Vito died a tragic early death, Madeleine remarried Peter D’Angelo, who adopted Ed and his brother Bobbie.  From very early on Ed showed a passion for learning.  He attended Nova High School, a school known for math and science. Ed later attended Rensselaer Polytechnic Institute in engineering, but then followed his great passion to pursue philosophy.  He obtained a PhD in philosophy in 1989 and then taught at several universities in New York state.  But practicality called and he returned to school for a library degree.  From 1992 to 2014, he worked as a supervising librarian at the Brooklyn Public Library.  In 2003, he met his wife Lisa Cohen.  They were married in 2019 after 15 years together.  Throughout his life, Ed retained a love of learning, cooking, conversation and good friends.  His relationships were extremely important to him and he cultivated them lovingly.  Through his 4-year battle with cancer, he showed unfailing courage and strength of character.  He maintained his love of life, family and friends—and of course philosophy.   Ed died on September 15, 2020.  He leaves behind his wife Lisa, his brother Bob D’Angelo, his sister Madeleine Dugan, his nephews Kerry and Kyle Dugan, and his niece Katherine Sciolino, as well as many friends and relatives.  He shall stay in our hearts forever.

In lieu of flowers, please make donations in Edward's memory to:

Sorry to see that you're gone, Ed.

As long as I knew him Edward was a thoughtful, compassionate, intelligent soul. He worked always to improve his mind and the level of conversation around him, and for that I am grateful. I encourage everyone to read his new book, which just came out: “The Handy Western Philosophy Answer Book.”