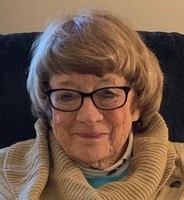 Elsie F. Baldwin 1928 - 2021
UTICA - Elsie F. Baldwin, age 92, passed peacefully on Monday, January 4, 2021.
Elsie was the oldest child born to Harold and Edith Fagan in Sherburne, NY. She graduated from Sherburne High School at age 16 and attended SUNY Fredonia, where she received a Bachelor's Degree in Music Education. She moved to Cortland, NY and began her career as Director of Christian Education at the Cortland Presbyterian Church. She later became the general music education teacher of students with special needs at Cortland/Madison BOCES for many years.
Her love of music was present in so many areas of her life. At BOCES, she started a band whom she took to perform at Madison Square Garden, New York City, as well as a student bell choir called the Chimers who performed in Washington D.C. She taught piano lessons and served as the Elementary Band Director at Marathon Elementary School, Marathon, NY. Elsie was proud to have published a set of songs she wrote and recorded to teach the sounds of letters called "The Super Sound Song Series". It was sold to many school districts to support preschool and kindergarten education. After her husband's passing, she moved to the Utica area where she was a substitute teacher in both the Utica and New Hartford School Districts for several years.
Elsie was predeceased by her brother, Richard Fagan, of Aurora, NY.
She is survived by her sister, Sally Greenburg, of Greenwich, CT.
She was married to William D. Baldwin, who passed in 1998. They lived in Cortland, NY, for 42 years and had three sons, Kirk, married to Debra Schloop, who reside in New Hartford, NY, Mark, who passed in 1977 at age 15 and Todd, married to Marcia Travers, who resides in Arlington, VA. Elsie is also survived by six grandchildren, Christopher, Elizabeth, Maggie, Billy, Sean and Tommy Baldwin. She also leaves her sister-in-law, Dolly Fagan; her nephew, Scot Fagan; and nieces, Lisa Fagan and Emily McGranaghan; as well as grandnieces, Hailey and Molly.
Mom gave all of us such a wonderful and cherished time together. She loved teaching, music, writing, playing piano, singing, camping, the ocean, the mountains, Syracuse University sports and most of all, being with her family. She always encouraged us to be curious about life, explore the world, enjoy music and rely on a strong faith we could hold close to our hearts.
A Memorial Service will be held in the spring in Cortland, NY.
To offer online condolences visit www.DonaldLBarber FuneralHome.com.

Never miss an update about Elsie. Sign up today.