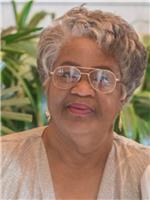 Not the right person? See All ›
LOCATION
Belle Chasse, Louisiana

Emelda "Mel" Cosse' Bentley, age 80, entered into eternal rest on Wednesday, October 7, 2020, peacefully at The Sanctuary of Passages Hospice, in New Orleans, LA. Emelda was born on August 11, 1940, in Davant, LA. She was raised in Pointe-a-la-Hache, LA, and a longtime resident of Phoenix, LA. Emelda was united in Holy Matrimony to Sullivan Crawford Bentley on December 11, 1960. She was a dedicated homemaker and caregiver to many. Emelda was a graduate of Phoenix High School Class of 1959. She was a lifelong and committed member of St. Thomas Catholic Church in Pointe-a-la-Hache, LA. She was the loving and faithful wife of 59 years to Sullivan Crawford Bentley. Mother of six children: Yvette Griffin (James), Lori Bentley, Cleatris Bentley (Detrece), Orin Bentley, Clarissa Bentley, and Treshiki Bentley-Giles (Corey). Grandmother of 10: Travon, Kia, Cayman, Candis, Cameia, Jawan, Laken, Kiarra, Kenny, Jr., and Jaylon. Great grandmother of 8: Treyon, Madison, Gerard, Jr., Talia, Rashad, Kendrick, Jr., Ky'Lee, and Ahmir. She was the sister to Larry Cosse', Sr. Six sisters-n-law and one brother-n-law. She was also survived by a host of nieces, nephews, and other relatives and friends. She was the Godmother of Rosalyn Narcisse and Garrick Isidore, Sr. Emelda is preceded in death by her parents, Milton Cosse', Sr., and Mildred Etienne Cosse'. Also, preceded in death by three sisters Gladys Cosse', Pearl Lafrance, and Joyce Thomas. Three brothers Milton Cosse, Jr., Rudolph Cosse', and Gerald Cosse', Sr. Also, preceded in death by 6 brothers-n-law and 1 sister in law. "Mel" as she was affectionately known, touched many lives in her 80 years, and she will be greatly missed and never forgotten. Relatives and friends also to neighboring churches of Plaquemines, St. Bernard, Jefferson, and Orleans Parishes, Plaquemines Parish Council on Aging, International Longshoreman Association Local 854, Plaquemines Parish Government, Plaquemines Parish School Board, Host Terminals Davant, and Dialysis Clinic, Inc., are invited to attend a mass of Christian burial on Thursday, October 15, 2020, at St. Thomas Catholic Church. 17605 Highway 15 Pointe-a-la-Hache, LA 70082. Father Sampson Abdulai officiating. Visitation from 9am – 11am (Reciting of the Holy Rosary @ 1045am). Mass to immediately follow at 11am. Interment/entombment St. Thomas Catholic Church Cemetery. Professional Services entrusted to Robinson Funeral Home in Belle Chasse, LA. Due to COVID-19, everyone MUST wear the proper face covering in attendance. Funeral planning entrusted to ROBINSON FAMILY FUNERAL HOME 9611 LA-23 Belle Chasse, LA 70037. (504) 208-2119. The Bentley family invite everyone to share memories and thoughts online at www.robinsonfamilyfuneralhome.com.

Family you are in my prayers at this timr

Rest In Peace Nanny....Always In My Heart.

We are never prepared for the loss of a loved one, but God is always prepared to help you through that loss. May His presence begin the healing in your hearts and souls and May His love surround you with the comfort only he can give. My condolenses to Y'All

Never miss an update about Emelda. Sign up today.