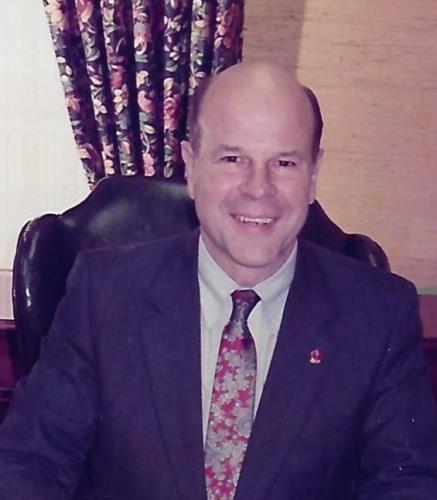 1937 - 2019 Columbus, NC--Emory Burdette Lewis passed away on December 23, 2019 surrounded by family and friends in Columbus, North Carolina. Born on January 11, 1937 in Albany, Georgia, Emory was 83 years old. He was the eldest son of Emory and Hazel Jones Lewis, both of South Georgia. Having lived nearly all of his life in Georgia, Emory moved to North Carolina in 2016 to be closer to family.

Civic duty was of paramount importance to Emory. He cared deeply for others and found fulfillment in his extensive work with Rotary International. Emory honored his father through his longstanding service as President of the Georgia Chapter of the American Heart Association. He also contributed his leadership skills to the local Chamber of Commerce and as President of the Georgia Community Bankers Association. Emory's hobbies included genealogy, hunting, and golf. He was also an avid do-it-yourselfer and continually amazed family and friends with his ability to build, garden, repair, mend, and do just about anything to a professional standard. He was resourceful, determined, deliberate, and perennially optimistic. In his final years, Emory was known at Tryon Estates for his charm and grace along with his radiant smile and his love for Sarah.

A memorial service at Tryon Estates will follow at a later date.

An online guest register is available at www.mcfarlandfuneralchapel.com

Sorry to here of Emory's passing. Trina and I I are praying for God's peace and comfort for the entire family. He was a wonderful boss while I was at First American Bank and Trust.
Stephen Lawrence

Sarah, I just saw Emory's obituary and I know this is such a difficult time for you. You may or may not remember me, but I was the Associate Youth Director at Druid Hills Methodist Church in 1960 or 61 when you and Emory were youth lay leaders. You had been recently married and I remember being so impressed that you were saving your salary to be able to buy a house! Though I have not seen either of you since that time, I have often thought of you with warmth.
My thoughts and...

Never miss an update about Emory. Sign up today.