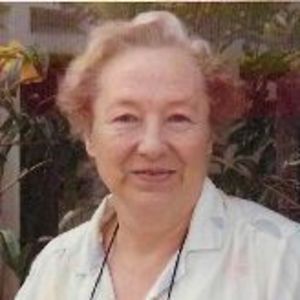 Esme (Chester) Ambos of West Windsor, formerly of Westfield and of Tinton Falls, New Jersey, died September 8, 2019 at the age of 95. Born in Tompkins Cove, New York, she earned a Bachelor of Letters degree from what was then known as the New Jersey College for Women (now Douglass College). She was a member of the only all-women class to have graduated from Rutgers University School of Journalism and was editor of the N.J.C. newspaper, the Caellian, her senior year and worked for a time for the Grey Advertising agency in New York City after graduation. She was married to the late Lt Cdr John F. Ambos, U.S.N.R., for 62 years. As a devoted member of St. Paul's Episcopal Church, Westfield, she had a long history of volunteerism. Her activities also included serving in many capacities in the Westfield Republican Committee and the Douglass College Alumnae Club of Union County. She was also a member of Atlas Chapter #99 of the Order of The Eastern Star. She taught Sunday School, was a Girl Scout assistant leader, and participated with the Rutgers Cooperative Extension Service . She is survived by her sister Lillian Frimpter of San Antonio, Texas; her children Paul Ambos of Highland Park, New Jersey; George Ambos of Philadelphia, Pennsylvania; and Jane Ambos Campbell of Plainsboro, New Jersey; and grandchildren Leonard Ambos, John Ambos, Elizabeth Ambos, Karen Campbell Rangrez, Victoria Campbell, and Carolyn Campbell. Her son Peter Quinn Ambos predeceased her. Visitation will be at Gray Funeral Home, 318 East Broad Street, Westfield 07090 on Sunday, September 15, from 4:00 to 8:00PM. Interment will be with her late husband in Brigadier General William C. Doyle Memorial Cemetery. In lieu of flowers, donations may be made to the Alzheimer's Association. Please go to: www.grayfuneralhomes.com to offer condolences.

Paul,
Joe and I wish to send our deepest condolences and pray God guards your heart at this difficult time.

Our sincere condolences to Paul and family on the loss of your Mother. We thank God for her life, well lived and pray that the Good Lord Grants her Perpetual Rest In Peace. Chris< Isha & family.

Christ Church, New Brunswick offers its deepest condolences to the Ambos family during this difficult time.You are in our prayers as you grieve your loss and celebrate Esme's precious life.

Never miss an update about Esme. Sign up today.