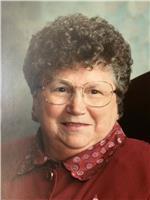 Evelyn Lucille (Keelean) Cook, 88 of Sault Ste Marie MI passed away July 24, 2020. She was born May 2, 1932, in Strongs Michigan to the late William and Lola Keelean. Lucille graduated from Brimley High school in 1950.

She is survived by her loving husband of 69 ½ years Robert John Cook Sr. They were married on January 19, 1951, and moved to Camp Breckinridge KY. Upon Bob's discharge from the Army they moved back to Sault Ste Marie where they managed then purchased Neville's Superette. Together they had 4 children, John(Marilyn) Lexington KY; Marty(Lynnie) Fairbanks AK; Ed(Wendy) Sault Ste. Marie; Pam, Gaylord. Lucille was blessed with 8 Grandchildren and 4 Great Grandchildren that she enjoyed spending time with.

In 1956 Lucille "filled in" for a vacation at Neville's, she continued to work there until her retirement in 1988. She loved her Nevilles family of workers and customers. She often referred to the employees as her Neville's Kids.

She enjoyed spending time at the cabin in Strongs, Michigan snowmobiling and four-wheeling. She was a member of the Suz-E-Q's Square Dance Club for many years. During the ten years they wintered in Casa Grande AZ, she was a member of the Red Hatters Society. Her creativity was endless and her work was beautiful. She enjoyed leatherwork, painting, woodworking, sewing, crochet, making ornaments, and decorations. While in Arizona she entered her Swedish weave blankets into the fair where she was awarded many blue ribbons. She was proud to say that she made 134 of these blankets, and she loved to share them with her family and friends.

Memorial contributions may be left to Michigan Bureau of Services for Blind Persons. Condolences may be left online at http://www.csmulder.com

In recent years her vision failed, during this time she enjoyed listening to books on tape provided by the Michigan Bureau of Services for Blind Persons

Dear Ed, Wendy, and Tasha, I'm so sorry for the loss of your Mother and Grandmother. I hope your memories will be a comfort during this difficult time.

Never miss an update about Evelyn. Sign up today.