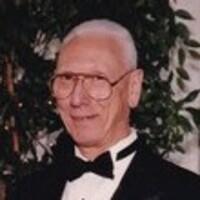 Of Collingswood, NJ, passed peacefully into Our Lord's arms on November 24, 2021, at the age of 99, surrounded by his children.

Mr. Watson was a resident of Collingswood, NJ for 70 years.  He grew up in Moorestown, NJ and graduated in 1939 from Moorestown High School, where he was the school electrician while also a student.  He enlisted in the Army Signal Corp.  He served in the U.S. Army during World War II under General George Patton, 3rd Infantry in France, Germany and Austria.

Mr. Watson worked at RCA in Camden, NJ as an electrical engineer for 33 years.  He attended Drexel University where he obtained his electrical engineering degree.  After leaving RCA, he went into the printing business at Garden State Graphics in Haddon Heights, NJ from 1971 to 1987.

Mr. Watson was also a member of Calvary Baptist Church in West Collingswood Heights, NJ, where he had been a Deacon for over 10 years as well as interim Pastor for over 5 years.

Relatives and friends are invited to attend his viewing Tuesday, November 30, 9 to 11 AM at the FOSTER-WARNE FUNERAL HOME, 820 Haddon Ave., Collingswood, NJ.  Funeral Service with Pastor Ron Hamilton will follow at 11 AM.  Interment private.

We loved Uncle Ferd so much! We will always remember his loving personality!

He was a faithful servant who served his Lord & Calvary Baptist Church. He will be missed,

May God bless you and your family in this time of sorrow. Ferd was much loved and will be sorely missed by our church family.

Never miss an update about Ferdinand. Sign up today.