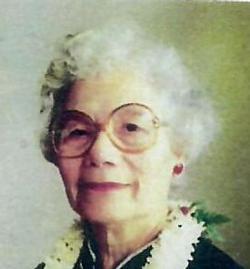 Florence E. Finch of 521 Hudsqn Street, Ithaca died on Thursday, December 8, 2016 at Oak Hill Manor.
Born on October 11, 2015 in lsabella Provence, Philippines, she was the daughter of Charles George and
Maria Hermosa Ebersole. At the outbreak of World War II, December 8, 1941 in the Philippines, she
was a civilian stenographer in the Office of Army Intelligence, Headquarters Philippine Department,
Manila. She was married to Charles Edward Smith, a special agent with the Office of Naval
Intelligence, also in Manila, who was killed in action off Subic Bay on February 8, 1942. After liberation
by United States forces she repatriated to the United States to live with her father's relatives in Buffalo,
New York. The American militarv forces withdrew from the Philippines on December 24, 1941 and the
Japanese entered Manila on January 2, 1941. Since she did not acknowledge her American
background the Japanese gave Finch a job with the Japanese controlled Philippine Liquid Fuel
Distributing Union. Soon she was writing out vouchers for gasoline, diesel fuel, oil and alcohol for the
Philippine Underground. She was also arranging for stocks of critical items to be destroyed when they
were shipped. During that time Florence's former American boss, Lt. Col. E.C. Englehart, was captured.
Soon after Finch received a letter from the colonel asking for soap and quinine for U.S. prisoners. They
took everything they could to them including taking their laundry and doing it for them. In October
1944 the Japanese discovered Finch's activities. She was then taken to a nearby Japanese military
station where she was questioned and tortured using electrical devices on all her fingers. the worst of
her experience was in Bilibad prison where she was confined to a 2 x 4 foot room, where she was left
squatting in GI pajamas, and starved. Florence remained in Bilibad trying to drown out the sounds of
others suffering and realizing the names heard called out were those to be executed. There was a trial
for her where she was sentenced to three years hard labor at the Philippines Women's Correctional
Institution in Mandaluong, on the outskirts of Manila. Conditions improved as the guards were not
Japanese. On February 10, 1945 the American troops came and freed the inmates. At that time
Florence weighed a mere 80 pounds,
Florence then chose to repatriate, to the United States, to live with her father's sister in Buffalo, New
York. She arrived in May 1945 and soon thereafter she joined the U.S. Coast Guard. The Coast Guard
was delighted to have a Navy widow and heroine from the Philippine Underground join their ranks.
Immediately she was awarded the Pacific Campaign ribbon for her service in the Philippines. After she
was discharged from the SPARS Florence was awarded the Presidential Medal of Freedom, the highest
honor an American civilian call receive from the government, in November 1947.Early in the 1990's a
questionnaire was sent to all women who were ever in military service as part of the Women's In
Military Service Memorial to be built in Washington, DC. Through this the U.S. Coast Guard discovered
her again and at which time were amazed at her contributions during WWII. The Coast Guard had
been looking for a way to open their new headquarters on the 50th anniversary year of the ending of
WWII. The Coast Guard found its something special in Horence Finch. On February 28, 1995 the
United States Coast Guard in Honolulu , responsible for 276,000 square miles of ocean, named its new
$3.5 million headquarters for florence Ebersole Smith Finch. At this time this humble woman's story
was revealed, as she had not shared it beyond her immediate family.
Florence was the widow of Robert Thornton Finch who died in Ithaca on August 12, 1968. She is
survived by her daughter, Betty Finch Murphy (Joe Longo) in Ithaca, her son, Bob Finch (Mary
Henderson) in Denver, colorado. Also surviving are her sister, Olive Keats in California, her
grandchildren Rob Murphy (Toni) in Erie, PA, Bryan Murphy (Melissa) in Austin, Texas, Heather Murphy
(Scott Fitchett) in Kirkwood, NY, Chad Murphy in Ithaca, Annie Finch (Jack Stephens) in Portland, OR and
Logan Finch (Melanie) in Denver, CO. Also surviving Florence are her two great grandchildren, Trey
and Lucas Murphy of Erie, PA ~Iong with numerous family members in Alden, NY, Columbia, MD, San Diego, CA, Los Angeles, and in northern California, Arizona and Alaska. As many of you know our
mother collected friends wherever she went and they remained close to her throughout her life. Her
life at Oak Hill Manor was extraordinarily busy due to their many activities, thanks to Debaura Dahl.
The list at Oak Hill Manor is far too long to thank individually but we would like to thank each and every
one for the excellent care and the love you so generously gave our mother. You took our mother from
being bedridden to walking laps in the hall after each meal to watering her flowers, doing her nails,
preparing her for numerous outings, sharing stories, helping with family dinners and conspiring with us
for many a surprise. Thank you also to friends Tinny Oey and Ann Cedarholm. Your friendship to our
mother had no boundaries. And finally a very special thank you to Katrina Morse. A simple
autograph in one of Katrina's books developed into a friendship like no other. Your endless generosity,
whether it be sewing, doing cprrespondence, experimenting with 'halo halo' or ever faithful Tuesday
evening visits brought our mother unexpected joy and love. You are so much a part of our family.

Florence Finch was a member of the First Presbyterian Church where she was an Elder and a Deacon
(serving a second term while she resided at Oak Hill Manor). A memorial service will be held at the
First Presbyterian Church at 315 N. Cayuga Street, Ithaca on Saturday, April 29th, 2017 at 1:00PM with
the Rev. Kirianne Weaver Riehl officiating. Burial will be at the Pleasant Grove Cemetery at 11:00AM
prior to the Memorial. Please, please, please absolutely no flowers as we will be planting a tree in the
church Memorial Garden in qpr mother's name. If you wish a donation we would graciously
recommend the Franziska Racker Centers, 3226 Wilkins Rd. Ithaca, NY 14850.

Thank you for your service and sacrifice. Filipinos and Americans are indebted to you for their freedom.

THANK YOU FOR YOUR SERVICE .... and to your family - how proud you must be to have had a real hero in your family for over a century and how blessed we all are for her bravery, selflessness and willingness to sacrafice for us all.

My condolences to your family for your loss. May God be your strength in this time of deep sorrow. Psalms 18:6

Dear Family, please accept my sincere condolences. Florence was special person, kind, good hearted to all, and a very friendly, helpful neighbor. I have many happy memories of chatting with her. Rest in Peace.

Dearest Florence Finch
We thank you from our hearts for all of your unselfishness and being such a wonderful giving human being to save your fellow man.
May God give you eternal rest and let perpetual light shine upon you.
Heart sympathy to your family and many blessings.

To VERY humble WWII hero. She lived TO BE 101 WHICH VERY good AFTER being a prisoner of war. I'm EX ARMY 1977 1981 MEDIC. IT takes a special WOMAN TO serve HER country. My sympathy GOES to ALL OF YOUR families. She is free OUT PAIN. God SPEED TO you.

From the reading of her life, Florence did a great service.
RIP