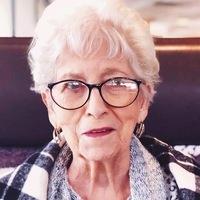 where she became a Rangerette. She met her future husband, James Herbert “Jim” Love who

While serving our country in the USAF, the young family was stationed in various locations in

the US and Europe. After returning to the states, they moved back to Texas to be closer to

Education. She retired after teaching over 20 years in Grand Saline public schools and

Frances was a faithful member of St. Dunstan’s Episcopal Church in Mineola. Over the past 6

years she has attended St. William Laud Episcopal Church in Pittsburg while living with her

daughter, Charlotte. Through the years of serving in the Episcopal Church, Frances has been a

member and officer of the Daughters of the King, ECW, Altar Guild, lector, and served on the

vestry in several positions. She was also an associate of the Community of St. Mary,

Greenwich, NY and Community of the Holy Spirit in New York City.

She loved to garden, read, and spend time with family (especially great grandchildren). She

Jenny and most recently her grandson Jacob.

Frances was preceded in death by her father and mother Leland and Louise Stinson,

She is survived by her children Charlotte Haygood, son and daughter-in-law Rt.Rev. William

The family would like to thank special caregivers, Pamela Shepherd and Shirley Waddleton for

their wonderful care for Mom over the past year. We would also like to thank Hospice of East

Texas for their care and compassion.

Due to Covid 19 regulations, a private family memorial service will be held at St. Dunstan's

Episcopal Church at a later date.  In lieu of flowers, memorials may be given to St. Dunstan's

Episcopal Church, Hospice of East Texas, or any charity of your choice.

Frances was a firm supporter of the Community of the Holy Spirit for 35 years. Her strong faith was evident as she gave quiet stability and guidance to me and others at Retreats and other gatherings. She is missed greatly.

“Almighty God we give you heartfelt thanks for good example of your servant, Frances, who having finished her course in faith, now finds rest and refreshment.”