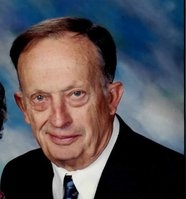 Francis W. Poisson Jr.
Francis "Fran" Poisson, 89, of Stratford, CT and North Eastham, MA passed away Saturday, December 14th from complications of Parkinson's. Fran was the beloved husband of Angela "Chickie" Poisson for 56 years and a great Dad who always put his family first. He was born in Fitchburg, MA and attended St. Bernard's High School, after which he served as a rehabilitation specialist and Head Athletic Trainer at Brooke Army Medical Center (TX) during the Korean War. After the army, he graduated from Arnold College which later incorporated into the University of Bridgeport. While an undergraduate, Fran was a member of the men's gymnastics team and a founder of the popular acrobatic trio "Bumps and Bruises" that was invited to perform on the Ed Sullivan Show. Fran also earned his Master's degree from the University of Bridgeport and a sixth year degree from Fairfield University. He was appointed as the first full-time Athletic Trainer and Intramural Director at UB in 1956. He was also a member of the baseball coaching staff. Fran became the Director of Athletics, a post he held until his retirement in 1991. During his time as Athletic Director, Fran led with an integrity first approach and found the time to serve on numerous National Collegiate Athletic Association (NCAA) and Eastern College Athletic Association (ECAC) committees. While at UB he co-founded the New England Collegiate Conference (NECC), served as its Commissioner, and the NECC Men's Basketball Championship trophy beared his name. He was twice named UB Outstanding Alumnus. In 1986, Fran was recognized by the Connecticut High School Coaches Association through its Distinguished Service Award. He was an active member of the group that founded the Bunnell High School Bulldog Club in Stratford. He donated time on behalf of high school athletics and mentored student college athletic trainers. Fran found great joy in spending summers and extended time with his family on Cape Cod where he was a 35-year subscriber to the Cape Playhouse, a frequent Cape Cinema attendee, and a Red Sox fan. He was a loving and devoted husband, father, grandfather, brother, uncle, and friend to all. Fran greatly enjoyed his sons' and then grandchildren's school accomplishments and extracurricular activity, including sports. He will be greatly missed by all who knew him.
In addition to his beloved wife Chickie, he is survived by his loving children, Ken Poisson and his wife Barb, Craig Poisson and his wife Karen, Todd Poisson and his wife Rachel Josephson, his six grandchildren, Josh, Tyler, Ryan, Maddie, Susie, and Sylvie, his sister Elizabeth Prentiss and her husband Doug and his niece Natalie. Fran was the loving son of the late Rita and Francis Poisson of Fitchburg (MA). Fran was a member of the First Congregational Church of Stratford for over 50 years. Funeral services will take place on Friday, December 20th at 11 a.m. in the Adzima Funeral Home, 50 Paradise Green Place, Stratford, with Rev. Ed Rawls officiating. Interment will follow in Mountain Grove of Easton Cemetery. Friends may call on Thursday from 5-8 p.m. Those desiring may make a donation in memory of Fran to the Michael J. Fox Foundation, P.O. Box, 5014 Hagerstown, MD 21741-5014. For more information or to make an online condolence, please visit www.adzimafuneralhome.com

Sorry for your loss Tatnall Family

I'm so sorry I missed this just reading this...this morning on Dec 21...my condolences to all the Poisson family....Fran was so good to me...when I was living in his neighborhood...God bless this man

Fran was a warm caring man and a strong rock at UB...during my time there he was quick with his wit ...compassionate ...loyal...you made us all feel like one big family...thank you

Never miss an update about Francis. Sign up today.