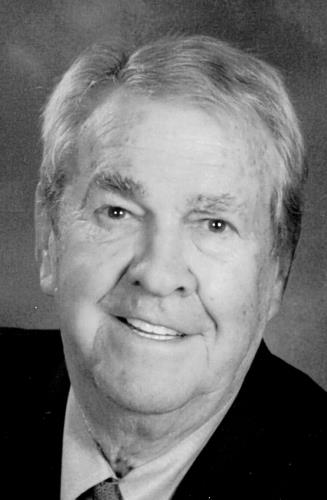 FRANK STAUNTON HARKINS JR. Our "Champion" peacefully passed away in his home after a year's battle with glioblastoma. Born Frank Staunton Harkins, Jr., on May 16, 1939, in Charleston, WV, to the late Frank and Margret Cabell Harkins, he was known as Bucky to his many friends and as Duke or Champion to his three children, their spouses, and his 11 perfect grandchildren.
He was graduated from Charleston (WV) High School, Virginia Polytechnic Institute and State University and Stonier Graduate School of Banking, Rutgers University. His professional life began at Kanawha Valley Bank where he worked for 15 years. A trusted and respected banker, he eventually became President and CEO of the Bank of Raleigh and later Chairman of the Board and CEO of Horizon Bancorp, Inc. He retired from his successful career in 1999.
He was deeply involved in the community and took great pride serving as a trustee, Deacon, and elder for the Beckley Presbyterian Church as well as in numerous leadership positions with the Chamber of Commerce, the YMCA, the United Way, Paul Harris of Rotary International, the former Mountain State University, Mac's Toy Fund, Theatre WV, the American Bankers Association, and the WV Bankers Association. Later in life, he was a member of the Providence Presbyterian Church and the Providence Country Club.
Bucky and his wife Ann started their lives together in Charleston, WV, where their three children were born. They moved to Beckley, WV, in 1976 where they raised their family and formed many strong and lasting friendships. In 2015 they relocated to Charlotte, NC, to be closer to some of their family. Ann and Bucky were blessed with 54 years of marriage.
Bucky was an avid golfer and enjoyed playing with both his "Young Friends" and with his "Senior Buddies." Anyone who faced him on a green quickly learned there was magic in his old putter. He loved reading, relaxing at Myrtle Beach, playing bridge and watching the stock market. He had a life-long passion for ribs, steak, BBQ and red wine.
His greatest joy came from time spent with his children and grandchildren. He had a natural knack for all form of games. From cards, to board games, to corn-hole or golf, he would win so often his family simply referred to him as the "Champion," a title he relished.
Mr. Harkins is survived by his wife, Ann King Harkins, their son, Frank Staunton Harkins III and his wife Eileen, their daughters VanBibber Harkins Pennington and her husband Deran, and Elizabeth Harkins Honrado and her husband Dane. Their 11 perfect grandchildren are Frank Staunton Harkins IV, Margaret Konnick Harkins, Luke Davis Harkins, Ann Elise VanBibber Pennington, Truman Huls Pennington, Tate Harkins Pennington, Cordell Dane Honrado, Jr., Madison Clay Honrado, Bailey Elizabeth Honrado, Blair Harkins Honrado, and Cohen King Honrado. He is also survived by his sisters, Patricia Harkins Frazier and Lynn Harkins Goldsmith and her husband Flick, all of Charleston, WV, and four nephews and three nieces.
The visitation will be held at Providence Presbyterian Church, 10140 Providence Church Lane, Charlotte, NC, on Friday, November 15, from 5 to 7 p.m. in the Fellowship Hall.
Funeral services will be at 11 a.m. the following day, Saturday, November 16, 2019, also at Providence Presbyterian Church.
In lieu of flowers, donations of sympathy can be made to the Providence Presbyterian Church, Charlotte, NC.
An online guestbook is available at www.heritage cares.com.

Ann, I am sorry to hear about this sad time for you and your family. I am so glad I was able to meet Bucky and see the love for this special man by his family. I will definitely be saying a special prayer for you Ann and for Bucky. Love to you all.

Our family is really saddened by your great loss. Bucky will be deeply missed. Like so many people I have such fond memories of him. He was a great leader of a wonderful family. We cherish our memories with your family members that span seven decades. All of you will remain in our thoughts and prayers, during this most difficult time. May GOD bless!

Thinking and praying for all your family for peace and comfort from your Briarcliffe Acres neighbors and friends. Love , Teresa Lynch and family and Jeri Himmelsbach and family

To Mrs. Harkins, Van and Deran, and the rest of the family, know that we pray God will bless you with His strength during this time as only He can do and we love your family and the testimony they have been to Trudi and me.

Ann, so many memories of our early years in Charleston came to mind as I read about Bucky. What a special guy. I'll never forget his playfulness and that bright smile. My heart goes out to you and all Bucky's family.
Annette Smith

Ann, I am so sorry to hear about Bucky. He was so likable with a great sense of humor. My sympathies to you and the kids. Sandy Graff

Never miss an update about Frank. Sign up today.