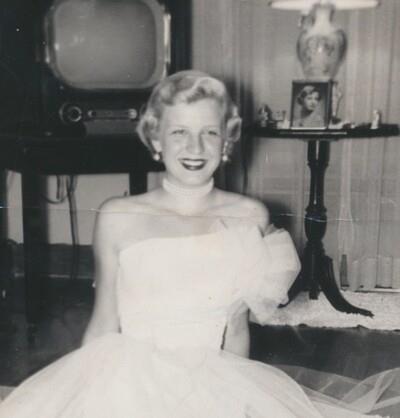 Frankie Jean Bryan Baxter was born December 1, 1934 in Shreveport, LA to Jeanette Jolley Bryan and Richard Franklin Bryan. She departed this earth to rejoin her Heavenly Father on July 3, 2020.

Frankie lived in Memphis, TN from 1936 – 1952. She was educated at Idlewild Elementary, and Fairview Junior High, where she was a member of Justeens and was a cheerleader.  She graduated from Central High School in Memphis, TN.  She was a member of Tau Delta Sigma, 21 Club and Clover.  She studied at Draughon’s Business College for 3 years, and her first job after graduation from Draughon’s was at H.J.Heinz Company.

From 1952 – 1959, she lived in Marshall, TX and in 1953 she won the Miss Marshall Pageant, and was 6th Runner Up in the Miss Texas Pageant.  In 1954 she met and married her husband , Gene Baxter.  They celebrated 57 years of marriage, and had two daughters.  She moved to Lonestar TX, where she became a dance instructor and opened her own studio.

From 1969 – 1996, she lived in Nashville, TN and the surrounding area, where she was a member and held past various offices of the Hermitage Chapter ABWA. She was a founding member and past president of the Natchez Trace Chapter ABWA.

From 2001 – 2014, she lived in Marshall, TX until the death of her husband, then moved back to Nashville, TN, where she lived with her daughter, Lesli. Lesli cared for her mother for the last seven years of her life.  Frankie loved being close to her grandkids and great grandkids, and enjoyed spending time with them and playing Yahtzee and cards. Frankie was a loving mom, grandmother, and great grandmother.

She loved helping others and loved Cypress Valley Bible Church.   She was loved by many and will be missed by them all.

Prayers for Frankies family. Im sorry for your loss. She was a very sweet lady. I wish i had got to know her better. She was my oldest cousin on the Bryan side of family. My mom Jeanette Bryan Simmons was her aunt. Praying for all of her family for comfort.

What a warm, wonderful lady. I am proud to have known both Frankie and Eugene.

Frankie Jean was a very sweet cousin and I got to see her a few times before and after Gene died. I pray she is resting and at peace.
Love,Carol Barletta

Never miss an update about Frankie Jean. Sign up today.