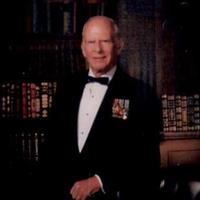 Frederic Bockoven of Hampton passed away Friday after a long and full life. He was born on April 30, 1921 on the U.S.S. Sherman near the Philippines.

During his life, he lived in the Philippines, Panama, Japan, Turkey, Germany, and at least 7 states. He graduated from the University of CA at Berkeley in 1941 and entered the Army as a Lieutenant. During WWII, he fought at Bastogne and the Remagen Bridge among other battles, earning a Bronze Star and Purple Heart. Upon his return, he was happily married to Helen Spinner until her death in 1986.

In 1995 he married Erma Henry, to whom he was devoted until his death.

Fred served in the Army for 21 years, reaching the rank of Lieutenant Colonel. During that time, he fought in the Philippine Hukbalahap conflict, spent 2 years in the CIA in Turkey, and fought in Korea, earning a Bronze Star and Purple Heart. He commanded the 13th Cavalry Armored Battalion in Germany, winning many awards. At one point during this tense time, he was ordered to mobilize his unit to reopen the route to West Berlin but luckily, an agreement was reached with the Soviets, averting war. After retirement from the Army, he worked briefly as a realtor at Drucker and Falk, and then was a highly regarded science teacher at Jeff Davis Jr. HS, Vice Principal at Kecoughtan, and Principal at Spratley, Pembroke and Jeff Davis.

He was an active member of St. John's Episcopal Church where he served as an usher, Chairman of the Worship Committee, and occasionally taught adult Christian formation class.

In retirement, Fred became an avid sailor, spending many happy days on the waters of Hampton Roads with best friend, the late Lorraine (Armie) Armstrong and others.

Fred Bockoven was a wonderful man, truly brilliant, accomplished, energetic, friendly and caring. He was a great father, husband, grandfather and friend.

Memorial services will be held at St. Johns Episcopal Church at a later time and interment will be at Arlington National cemetery at a later date. The family wishes expressions of sympathy to take the form of contributions to Boy's Home, Covington, VA, or Wounded Warrior Foundation.

I have fond memories of Mr. Bockover from my time as a student at Pembroke High School, as he was always very straight and fair to us students. I had no idea that he had led such an amazing life before we knew him, but it does explain his equanimity in the face of all our hijinks. I am sad to hear of his passing and my thoughts are with his family.

Never miss an update about Frederic. Sign up today.