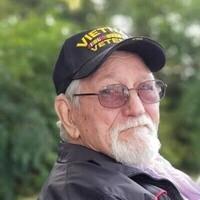 He graduated from Hershey High School with the class of 1961. After graduating, he entered the U.S. Navy on September 26, 1961 and served until he was honorably discharged on January 20, 1966. After serving, he worked in the plumbing industry for 30 years where he became a master plumber. He worked numerous other jobs and retired after 20 years of driving school buses for Brady Public School, which he really enjoyed.

Gary was united in marriage to Carol (Kohl) on December 26, 1963 and to this union 4 children were born: Tracy, Judy, Christine, and Shary. In 1978, he married Janeth Meyer and was blessed with two more children: Keely and Kasey. In 2009, Gary married Carol again.

He was a member of the First United Methodist Church in Brady, NE and the Wood Carvers Club of North Platte, NE. He was a former Boy Scout Leader for the The Boy Scouts of America in Gothenburg, NE. He enjoyed carving and woodworking, camping, attending auctions, but most importantly he loved his family.

A Memorial Service will be 1:30 p.m. Monday, March 1, 2021 at the Brady Community Center in Brady, NE with Pastor Janie Freeman officiating. The burial of ashes will be at Fort McPherson National Cemetery, Maxwell, NE with Full Military Honors provided by the North Platte Veterans Honor Guard. Memorials are suggested to the family to designated at a later date.

He was a very nice man. I loved him as a bus driver.

Uncle Gary was always a safe place for me. He always made an effort to engage, even when I was very young. I always knew I was loved and such a fun and funny man to be around.
I know his loss will leave a profound hole in his family's lives. I pray for peace and comfort for you all.

Keeping you and your family in our thoughts and prayers during this difficult time.

Tracy and family, so very sorry for your loss.

Gary was a such a fun loving sweet guy he will be missed. So very sorry for all of your loss hugs and prayers.

A good man. Will be missed. Hearts to the family.

So sorry for your loss R.I.P. Gary... he was a good man..He worked out at the railroad for a few years at the diesel shop...

I am so sorry for your loss sending prayers for you all..rest in peace Uncle Gary

Thoughts and Prayers for you all. So Sorry for your loss