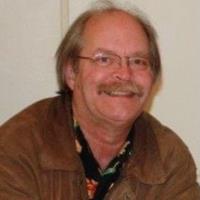 On Sunday February 21, 2021 Gary Daum 69, of Camano Island, Washington passed away in his beloved home he shared with his sweetheart Karen of 45 years.

Gary was born on Valentine's Day February 14, 1952 to parents Mary Lou and Harold Daum.  He grew up in West Seattle and as a teen moved with his family to Houston, Texas.  He spent just a short time there before moving back to Seattle where he called home.

Gary proudly served his country in the Army.  He especially enjoyed his time spent stationed in Stuttgart, Germany which he loved reminiscing about.

He had a life-long career at Boeing as a Graphic Designer, and later helped his wife Karen at the Camano Island Chamber of Commerce.

Gary had an extraordinary talent as an artist.  His passion for drawing and painting were remarkable!  Even in an instant he could create a masterpiece!

He was a lover of all God's creatures, especially the four legged furry ones.

He also loved the outdoors, spending time up at their place at Lake Tyee with wonderful friends they met there.

Gary was survived by his wife Karen of 45 years.  He was preceded in death by his mother and father, and his twin brother Greg, who sadly passed 7 months before Gary.

Gary will be lovingly remembered as a caring, gentle soul with a big heart, love for animals and making people laugh with his wonderful sense of humor.  He will be greatly missed by all who knew him.

I love and miss you Greg and Gary❤❤

The first three men in my life❤❤❤

Thank you for your services Gar❤