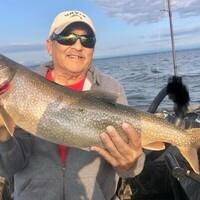 Lake Luzerne - Gary N. DeCesare, 65, of Lake Luzerne, NY, passed away peacefully at his home following a long illness on May 2, 2021 with his loving wife by his side.  His final days were spent surrounded by his friends and family sharing memories of a lifetime before he was taken home to heaven or as he called it “God’s Country”.  This special time brought him such joy and peace.

Gary, a son to the late Americo (Val) DeCesare and Lorraine H. Wiley was born on October 16, 1955 in Barre, VT. He was raised in Schenectady, NY, and a graduate of Mont Pleasant High School.  Gary’s love for the outdoors began as a child camping on the shores of Schroon Lake.  His parents instilled in him and his brothers a deep lifelong passion for hunting, fishing, and the great outdoors.

On May 5, 1974, he married his best friend and love of his life, Diane Abbott.  Over their 47-year marriage they raised three beautiful children and were blessed with 8 wonderful grandchildren.  Gary loved being a “Papa!”

Over the years Gary owned and operated several businesses in Schenectady and Queensbury, most recently Instant Replay Sports which became a gathering spot for his loyal friends to plot and plan their next hunting or fishing adventure.  Gary spent his early years as a volunteer fireman, EMT and lieutenant (past) of the Fort Hunter Fire Department in Guilderland, NY. He also served in many outdoorsman organizations including President (past) of the local chapter of Buckmasters and Vice President (past) of the Upper Hudson Beagle Club. Gary and his brother, Alan shared a passion for beagling and enjoyed countless hours raising field champions and rabbit hunting. Gary was an avid fan of Hockey and in his retirement he found his dream job of driving the Zamboni at the Lake George Forum.

Gary was a communicant of the United Methodist Church of Queensbury. The family gives heartfelt appreciation to our church family for all the care and kindness shown to him with calls, cards, visits and assistance with transportation throughout his long illness.

In addition to his parents, Gary was predeceased by his grandparents, Emma and William Wiley, and Carl and Ida DeCesare.

The family wishes to extend a sincere Thank You to Dr. Mihindu, the DCI Renal Center staff and the Nurses and staff at Warren County Health Services for all the years of care and compassion given to Gary and his wife.

Gary’s ashes will be laid to rest June 27th at a private ceremony with his family in the place he loved most, Schroon Lake.

Condolences may be sent directly to his wife, Diane DeCesare at the family home in Lake Luzerne, NY or through Baker Funeral Home @ www.bakerfuneralhome.com

“A limb has fallen

from the family tree,

don’t grieve for me.

the laughter, the song,

the Good Life I lived

while I was strong” Anonymous

There will always be a warm spot in my heart for you Gary. XOXO We love you so Gary.

Bunny bowl will always be, we will toast our lost brother, no more pain brother. I love you