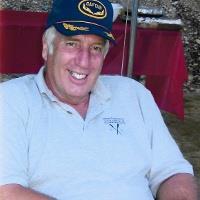 Gary M. Houston died as expected on Wednesday, July 31 peacefully in his home at the age of 72.  It was the first thing he ever completed ahead of schedule.  Born on October 12, 1946 in Hardwick, VT to Hugh and Avis (Harvey) Houston, Gary spent his youth in the hills of Walden where he enjoyed sledding, sugaring and flipping his sisters out of his little red wagon.  In 1957, the family moved to Craftsbury and he graduated from Craftsbury Academy in 1964.  He attended Vermont Technical College where he received an Associate's Degree in Mechanical Engineering before returning home to take over the family farm.  Gary retired from farming in 1997, embarking on a second career working with his sons and together they established Houston Light Construction.  He was a creative and innovative thinker who loved to build and tinker, be it on houses, barns or cars and he had an innate ability to aptly apply his knowledge to a myriad of challenges.

On November 10, 1967 he went on a blind date with Nioka Heath, the love of his life and they married on August 31, 1971.  Together they raised four children:  Megan Houston of South Burlington, Joe Houston of Craftsbury, Jesse Houston of Driggs, ID and Annie Houston of Walden.  Family was incredibly important to Gary and he relished time spent working, playing and socializing with them at every age.

In 2002, Gary and Nicki moved to Hyde Park where they enjoyed many Centerville sunsets on their front porch swing.  Gary valued civic duty and served his community regardless of where he lived.  This included membership on the Craftsbury School Board, Craftsbury Academy Trustees, Craftsbury Planning Commission and Development Review Board in Hyde Park.

A strong supporter of fun, Gary enjoyed playing cards, going on adventures and chatting with family and friends, often with a cold beverage in hand.  He was best known for his sharp, dry and...…..slowly delivered...…..sense of...….humor.

In addition to his wife and children he is survived by granddaughters, Hunter and Olivia Delaney and son-in-law, Travis of South Burlington; daughter-in-law, Allie Hastings of Craftsbury; sisters, Sarah Houston of Walden, Susan Slosek and husband, Steve of Nantucket, MA; Amy Curtis of Newport, VT; Judy Forrester and husband, Arthur of Yarmouth, MA; Anne Starr and partner, Dennis Anderson of Papillon, NE and Rebecca Young and husband, Robert of West Glover, VT as well as many beloved nieces, nephews, extended family members and friends.  He is predeceased by his parents and sister, Lillian Houston.

A celebration of life will be held on Saturday, August 10 from 2:00-6:00 p.m. at Gary and Nicki's residence located at 1110 North Hyde Park Road, Hyde Park, VT  05655.  Friends and family are invited to bring a chair, a drink and remembrances.  Interment will be at the Houston Hill Cemetery in Walden at the convenience of the family.  In lieu of flowers, please make a donation in Gary's memory to the Lamoille Area Cancer Network, 198 Farr Avenue, Morrisville, VT  05661.

Faith Funeral Home is assisting with arrangements.  Online condolences may be made by visiting faithfh.net.

So sorry to hear, Nikki. My best to you and your family.

My dear Nikki: We are very saddened to hear about Gary. He was a true Vermonter whose family came first. He was a staunch supporter of community endeavors; if Gary was in favor of something, you could be sure it was worthwhile. His wry wit was truly a joy that we will miss. Our thoughts are with you and all of your and Gary's family, and our spirits will be with you on Saturday as you celebrate the life of this very special man. Anne and Warren

Hi Nicki So sorry to hear about your husband Gary. I know we talked very little being a neighbor but you are in my prayers and the family. He will be missed. Eva Bapp

Nikki & family - I am so very sorry to hear of Garys passing... I so enjoyed chatting with you both whenever our paths crossed... Please know, you and your family are in my thoughts and prayers...

So, so sorry Nikki & family for your loss. Enjoyed visiting with you & Gary wherever we met. May the love of friends and family carry you through your grief.

My sympathies to Nicki and family. May your memories help you thru these difficult days.

We as a family feel enriched for having known Gary. Our thoughts are with your family as the memories and stories will go on for many years to come.

Our sympathies to Gary's family.