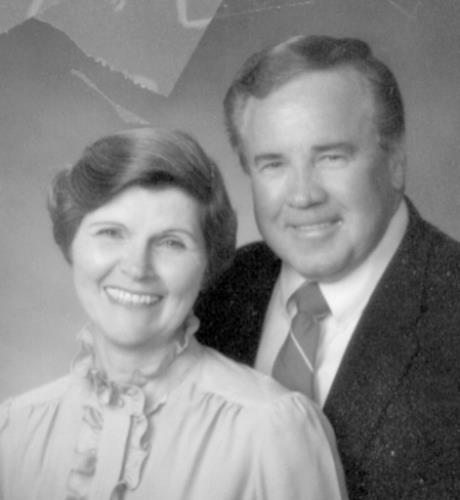 Not the right person? See All ›
LOCATION
Murray, Utah

"FERG"
George was born in Salt Lake City to George W. and Edith Thorum Ferguson on October 16, 1923. He was the youngest of six children and was preceded in death by his five sisters, LaVon, Vera, Virginia, Wanda, and Donna. He cherished his days in South Cottonwood (then 5600 S and 900 E), where his father started the Rose Leaf Dairy. He and his sister Donna had the run of the open dairy fields, where they cemented their life-long friendship and devotion to each other. George loved athletics and excelled at Granite High in football and track.
Following graduation from Granite in 1941, he began college at the University of Utah, but his studies were interrupted by WWII and his enlistment in the US Army where he served in the 415th Military Escort Guard Company, serving tours in North Africa, England, France, Belgium, and Germany; he was on his way to the Pacific when the war ended. As was typical in all his endeavors, he forged friendships with his service buddies, including Sam Weller, that lasted a lifetime. In his retirement, George worked with Sam Weller in his bookstore.
In 1947, while working a summer job building the Stagecoach Inn, George met his "West Yellowstone Sweetheart", Martha ("Muffie") Kuhlmann. Their love affair, which culminated in marriage on March 22, 1948, lasted 62 years until Muffie's death on August 31, 2009. George and Muffie had one child, Dennis Ferguson.
George was among the U's first College of Journalism graduates. He spent nearly a decade with weekly newspapers in Vernal, Murray and Coalville, where he and Muffie became the owners and operators of the Summit County Bee.
George then began a 30-year career with the Deseret News, most of which he spent as a sportswriter and managing editor of the sports department, ending his reporting career as associate business editor. For 20 years he was also the Mountain West correspondent for Sports Illustrated Magazine. Relationships were most important to him, so when asked about his Sports Illustrated experience, his first comment was "my boss was a great lady, Elaine Milosovic." One of his proudest journalistic moments was his Sports Illustrated article covering Craig Breedlove breaking the land speed record at the Bonneville Salt Flats in 1970. He received many accolades (voted Utah Sportswriter of the Year four times, Deseret News Outstanding Performance Awards, served on the All-America Basketball Committee), but the capstone of his career was in mentoring others and "herding the cats" of the sports department. He was proud that he hired the first woman sportswriter at Deseret News. His favorite writing was doing feature stories, making his subjects come alive not only as athletes, but as human beings.
George and Muffie were avid ballroom dancers and were founding members of the "Hi-Steppers", a group they danced with monthly for 50 years. They were regulars at the Shakespeare Festival in Cedar City and the Utah Opera Festival in Logan. They loved the out of doors and working on, entertaining at, and playing with grandchildren at their cabin in Beaver Springs.
George was a devoted father and grandparent, rarely missing one of his grandson Trevor's Ute tennis matches or one of his granddaughter Chelsea's horse shows (although he often had to go on walkabouts because of his exuberant cheering). George relished his two grandchildren, Trevor (Charleen Ferguson) and Chelsea (James Humble) and four great grandchildren, Madeline, Landon, Joshua, and Isabelle. He has enjoyed the last eight years with his cherished daughter-in-law, Charlotte Miller; her daughters and their families, Bina Skordas (Sam Woolf), and Annie Jackson (Derrick Jackson) and Charlotte's nephew Ben Muhr and wife Tara brought him much happiness.
George had a life full of many wonderful professional and personal experiences and some monumental challenges, including overcoming alcoholism. His greatest legacy, however, is the kindness, love and respect he gave to others. It is that legacy that will live on in our hearts.
Funeral services will be held Saturday, February 3 at 1 p.m., Jenkins-Soffe Mortuary, 4760 South State Street. Friends may also visit at the mortuary prior to the service from 11:30 a.m. to 12:45 p.m. There was no bigger Ute fan, so George would be immensely pleased for those attending or visiting to adorn themselves in red! Interment will be at Murray City Cemetery.
In lieu of flowers, please make a donation to the University of Utah Tennis program or another U of U educational or athletic program of your choice.
Online condolences may be shared at www.jenkins-soffe.com.

Sorry for your loss. I always loved uncle George. He was my favorite uncle. He always took a genuine interest in others and was so kind. I have very fond memories of him and Muffie. I am Vera DeLands first Granddaughter.

Sorry for your loss may you draw comfort from God's word at Hosea 13:14. L Ohio

Offering condolences for the loss of your loved one. May God comfort your hearts and help you through this difficult time.

My Condolences To The Family:
I'm so sorry for your great loss. May the God of all comfort be with you all during this difficult time.

"He was proud that he hired the first woman sportswriter at Deseret News." I was that person. Thanks so much, George. I worked there 33 years, thanks to you. I will miss that great laugh of yours.

"He was proud that he hired the first woman sportswriter at Deseret News." I was that person. Thanks so much for that, George. I was there for more than 30 years, thanks to you. I will miss that great laugh of yours.

What a delightful man George was. I knew him at Park Lane. He was always such a gentleman and very kind. He was a friend of my father when he too was at Park Lane. I always enjoyed visiting with him at many lunches and dinners and special events. I will remember him fondly.