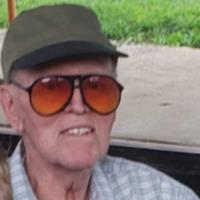 He was raised in Kirkwood, DE by his foster parents Frank and Edna Johnson.

He was employed by Canteen meal services and did house painting as a side job.  He also drove vehicles for Solloway’s years ago.

He is preceded in death by his wife Vivian, his Mother Anna, Father Frank Hudson, sister Roselle Geyer, and brother Charles Hudson.

We enjoyed many years as George's next door neighbor before his passing. He was so kind and friendly. Our son would sometimes mow his lawn, and George always gave him a cold can of Pepsi when he finished! He always had a cheery hello for everyone. He was truly a lovely person.

Rest in peace Uncle George we love and miss you dearly!

George and Vivian shared many Christmas dinners and other occasions with our family. Their presence always brought joy and happiness.

In Memory
of
My Dear Ol’ Uncle George,

May Your Soul Find Peace in Death