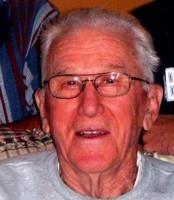 Not the right person? See All ›
AGE
100
LOCATION
Lena, Illinois

George W. Matz 1920—2021
George W. Matz, 100 years young, of Lena, Illinois, went to be with the Lord on January 11, 2021. George was born in Madison, South Dakota, to Gotthart and Augusta Matz on September 30, 1920.
He grew up in Dell Rapids, South Dakota, graduating in 1940. He enlisted in the Army in 1941, serving as a medic in World War II in both Africa and Italy until 1944. He married Edna Johnson on September 6, 1947, in Jackson, Michigan. She preceded him in death in 2018. After returning from World War II, he attended South Dakota State College in Brookings, earning his Bachelor of Science in 1948 and began his teaching career. He later went on to earn his Master of Science from Bemidji State College in 1960. He taught in multiple states including North and South Dakota, Minnesota, and finished his teaching career at Freeport Junior High School as the head of the Science Department. After leaving teaching, he spent the rest of his professional career working at the State Bank in Freeport. After retirement, George and Edna moved to Height-of-Land Lake, Minnesota, and later Detroit Lakes, Minnesota. In 2007, they returned to Illinois and relocated to Lena, Illinois. George was a lifetime member of the Freeport Masons. He was also a member of the Minnesota Legion and Harmony United Methodist Church in Freeport, Illinois. George enjoyed gardening, watching his grandchildren and great-grandchildren's school events, and spending time with his family.
George is survived by his four children; James (Addie Dog) Matz of Culpepper, VA, Judy (late Chuck) Webster of Lena, IL, Don (Carolyn) Matz of Warren, MN, and Jeff (Sue) Matz of Freeport, IL, grandchildren; Jeremy (Stephanie) Matz, of McConnell, IL, Melissa (Shayne) Campbell of Lena, IL, Josh (Nikki) Matz of Freeport, IL, Katye (Jacob Phelps) of Granbury, TX, Marcus (Kelsie) Matz of Maple Grove, MN, Scott (Jill) Webster of Freeport, IL, Aaron (Kris Dehaven) Webster of Freeport IL; 13 great-grandchildren; 5 great-great grandchildren;' numerous nieces and nephews; and lifelong friends.
He was preceded in death by his wife Edna, son-in-law Chuck Webster, parents Gotthart and Augusta Matz, and 7 siblings; William, Leo, Art, Freida, Leona, Arnie, and Donnie.
Funeral services will be held at 11:00 AM on Thursday, January 14, 2021 at Harmony United Methodist Church in Freeport, Illinois
A visitation will be from 9:00 AM until time of services on Thursday, January 14, 2021 at the church.
Burial will be at Chapel Hill Memorial Gardens in Freeport, Illinois.
Pastor Eddie Eddy will officiate the services.
A memorial has been established in his memory.
Condolences may be sent to the family at www.leamonfh.com.

Our sympathy to the family. George was the nicest, kindest person. We loved when the two army families got together. The stories we heard the last time we visited were amazing. I tell the making tea one all the time.