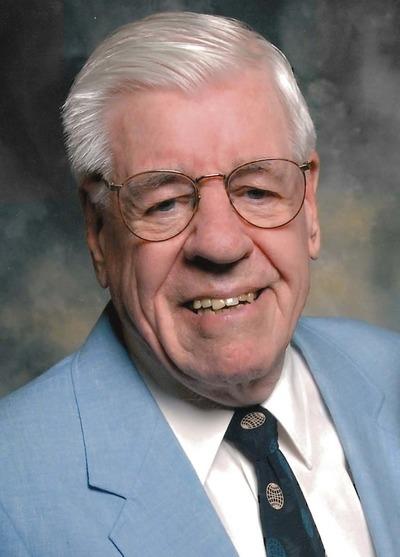 Funeral services will be held at 11:00 am Tuesday in the First United Methodist Church, Mendota, with Rev. Mary Bohall officiating. Burial will be in Restland Cemetery, Mendota with military rites by Mendota VFW Post 4079. Visitation will be one hour prior to the service. Merritt Funeral Home, Mendota is in charge of arrangements.

George was born May 23, 1925 in Urbana to Rev. Joseph and Ella (Eliason) McMahon. He grew up in small towns in central Illinois during the Depression, graduating from high school in Tonica in 1943. He was a WWII combat veteran of the US Army in the Pacific Theater. He was inducted in the Army in summer 1943. As a member of the 81st Infantry (Wildcat) Division, he participated in the invasions of Angaur (Palau) and Leyte (Philippines) and in the occupation of Japan. His rank at the time of his discharge from service was First Sergeant.   He graduated from the University of Illinois on the GI Bill. He married Betty Wenzel in 1957 and they lived in Tonica for one year before moving to Mendota. George worked as plant manager of Ristokrat Clay Products, a brick plant in Lowell, IL and as an accountant for Fasco Mills in Mendota. In retirement, he served as treasurer of the Mendota Grade School District and secretary of the Mendota Elks Lodge. George was a life-long member of the Methodist Church and served the church in Mendota in many capacities over many years. He enjoyed golf, bowling, time with family, and was a devoted Cubs fan. He was known as a friendly, optimistic, and gregarious person, and he maintained his positive outlook in the face of the unrelenting challenges of old age.

He is survived by Betty his beloved wife of 62 years and two sons, Robert (Angela) McMahon of Madison, WI and Ted (Gwen Jones) McMahon of Dayton, VA.

He was preceded in death by his parents, two sisters Grace and Ruth and three brothers Daniel, Thomas, and fraternal twin-brother James.