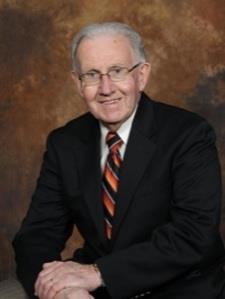 Not the right person? See All ›
LOCATION
Alma, Michigan

Age 79, went to be with his Lord and Savior, on Thursday, July 2, 2020. George was born October 16, 1940, in Alma, the son of Lawrence and Ruth (Manning) Showers. He married Alice Thum on August 25, 1962 at the Seville Community Church of God. He was the Pastor for Seville Community Church of God. He helped grow the church, not just in a bigger building but in followers of Christ also. George graduated from Vestaburg High School with the class of 1959. After high school, he earned his teaching degree from the University of Findlay. George continued his education and earned his Master’s Degree and Educational Specialist Degree from CMU. George started his educational career at Pine River Area Schools in Leroy, he then returned to his home area and was the superintendent/principle/teacher for Sumner Schools, then went to his alum mater, Vestaburg, and was the elementary principle and became the superintendent in 1983. Following Vestaburg George went on to become the superintendent at Lakeview Schools for 5 years, before finishing as the interim principle for St. Louis Elementary Schools. During his work in the local elementary schools, he also taught at Alma College and helped Central Michigan student teachers find placements in local area schools. George believed that working in the schools was as much about ministering to pupils as teaching them. George was very active his entire life and believed in giving back. He was on the Board of Trustees for both University of Findlay and Winebrenner Theological Seminary. He served on many boards in many capacities for the Churches of God General Conference. George was a member of the Vestaburg Lions Club, Mt. Pleasant Striders Club, his morning coffee club, Chaplin at many hospitals and nursing homes. He was an avid sports fan and was the Chaplin for the Ithaca High Schools football team. He enjoyed running, golfing and serving others. He is survived by his wife Alice, son Brad Showers, daughter Kathy Edwards, grandchildren Brian (Michelle) Showers, Joe (Melissa) Showers, Nicole (fiancé Darin Johnson) Showers, RJ Melinowski, Allison Melinowski, Chris (Julie) Edwards, Sarah (Tim) Riley, great grandchildren Addyson, Katie, Miley, Jackson, Isabel, Silas, Abbie and Ava. George was preceded in death by his parents, son-in-law Robin Edwards and brother Jim Showers. Funeral services will be held Tuesday, July 7, 2020 at 1 pm at the Seville Community Church of God with Pastors Bob Fall and Jim Wilder officiating. Interment will follow at the Richland Township Cemetery. Visitation will be held Sunday from 4 to 7 pm, Monday from 4 to 7 pm and Tuesday from 11 am to 1 pm all at the church. In lieu of flowers, memorials may be made to the Seville Community Church of God. Arrangements have been entrusted to the care of the Lux-Moody-Wolfel Funeral Home, Alma. To view George’s obituary or to leave a condolence for the family please visit www.luxfuneralhomes.com.

I'm so sorry to hear that George has passed. I knew him some through running and doing road races, which we both did. We were the same age and from the same place. We would talk at the races. He would share some high school history. George was such a nice person. The world lost someone special.

Great man describes George best. His prayers and upbeat visits certainly helped me as I recovered from serious illness, as much as the medical care. Bless him as he goes home with the Lord.

Dear Alice, Brad, Kathy and extended families,
My heart was saddened when I received the news of Georges passing.
He was truly a remarkable man - his devotion to family, students, and staff, and the church provided platforms to spread his gospel and the Lords gospel. He loved life and loved to laugh. He reinvented himself over the years.
47 years ago, I first encountered George at Vestaburg Elementary School. I oversaw the CMU student Teaching Program. Our friendship began on...

So sorry to hear of Georges passing. George was my first little league baseball coach when we moved to Sumner. He always mentioned that every time we met. George was truly one of the nicest and most thoughtful men I have ever known. My thoughts and prayers are with all of the family.

I am saddened to hear of the Showers family loss. I thank the Lord for George and Alice, as they served my mother and step father well when they lived in Alma a few years back. I enjoyed taking my wife Korinne, along with Mari and Richard, to service when we came to visit Central Michigan. Thank you for the Godly legacy you have left behind as you go on to glory George.

Mr Showers was a very kind man that never gave up on me. Mr. showers was my Superintendent when I was a trouble teen at Lakeview High School. I look back on his visits to my place of employment to check up on me! Wonderful, Godly man that I credit a lot of my success too.

The planet has lost a true hero! Gpas was always working to help everyone else. From the hospital to the church campground he was always there for anyone young & old. We spent many a days on the golf course ( its where I learned to drive) & he was always in the stands no matter what the sport or weather conditions. Our family lost our Patriarch and the world lost a hero. I love you Grandpa, Im glad you are with the lord & dont worry will take care of Grandma.

My sister and I met Pastor Showers late one dark evening in the elevator at Alma Hospital after we had spent a long day at the bed of our critically ill elderly mother. Pastor Showers apparently noticed our distress, identified himself and asked if he could help. He kindly counseled us , comforting two exhausted strangers, offered a prayer for our mother and us, and then we all left the hospital, going our separate ways. I will always be grateful for his compassion. He will be missed. My...